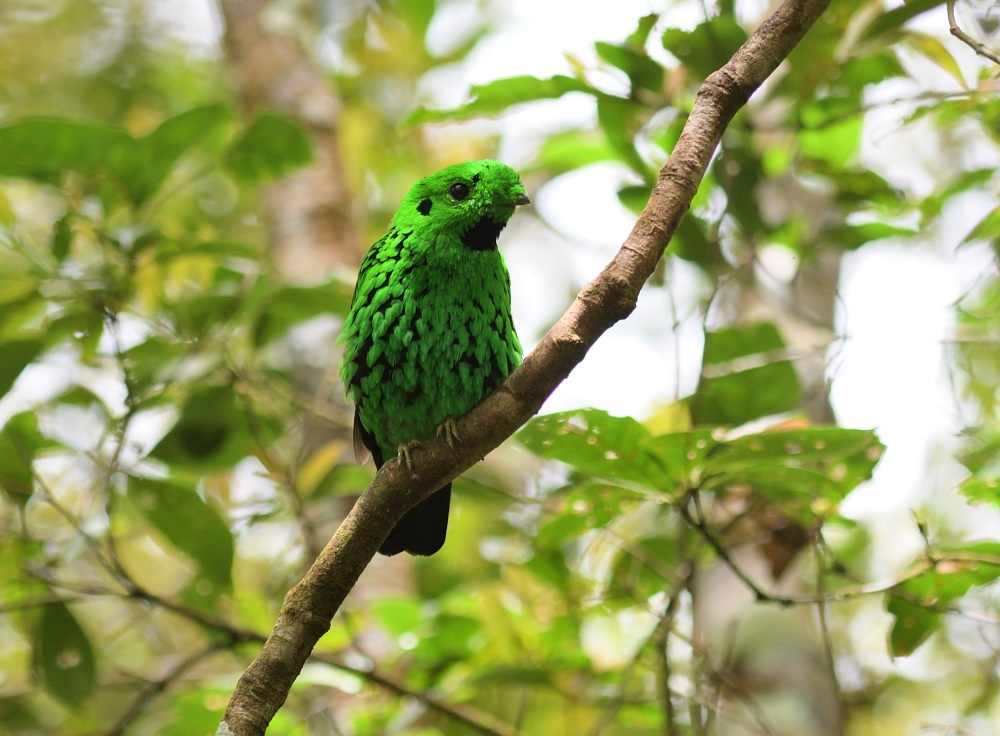 visit' places on every birders wish-list. We will be based in the northern state of Sabah, which is part of Malaysia and begin our exciting journey with a visit to the Rafflesia Reserve in the Crocker Mountain Range for our first endemics that are more difficult elsewhere such as Bornean Leafbird, and both Bornean and Mountain Barbets. Moving to higher elevations and the cool montane forests of the very impressive Mount Kinabalu we will spend several days looking for such enigmatic species as Everett's Thrush, Bornean Stubtail, Kinabalu Friendly Warbler and Whitehead's Trogon amongst a fine cast of endemic and localised species. There will also be some time at Poring Hot Springs before descending into the verdant lowlands, the lush riverine forest and mangroves on the Kinabatangan River and two different lowland rainforest areas at Sepilok and the famous Borneo Rainforest Lodge at Danum Valley. This is an exciting, bird-filled ride in search of some stunningly beautiful endemics, from Bornean Bristlehead and Blue-headed Pitta to Great Argus  and Storm's Stork and everything else in between! In addition to a mouth-watering collection of endemic birds, the forests of Borneo are spectacularly rich in many more widespread tropical Asian species including up to eight species of hornbill, six species of broadbill, five species of trogon, pittas, babblers, barbets and many others such as Buffy Fish Owl, Wallace's Hawk-eagle and Bat Hawk. While birds are our priority the incredibly rich forests of Borneo also offer a chance of some spectacular mammals such as Proboscis Monkey and Orang-utan.

Group size: Minimum for tour to go ahead 5 and maximum 8.

Included in cost: Accommodation in twin rooms en-suite, all meals including picnic lunches (from dinner on Day 1 to lunch on Day 14) where necessary, all entrance fees to National Parks, transport throughout in air-conditioned vehicles, boat trips, and services of leaders.

Not included: International airfare, insurance, departure tax, optional hotel in Kuala Lumpur or Kota Kinabalu for night of 7th April (if requested), camera fees, drinks, tips and items of a personal nature. Please note the tour ends upon our return to Lahad Datu - we can arrange flights back to Kota Kinabalu, so please ask our office for details.

Accommodation: Ranges from standard to very good. We will stay in the best available lodges close to the birding sites we visit to cut-out the necessity of any long drives before reaching the best birding areas each day.

Tour Code: This is a standard birding tour with regular birding walks along roads and well marked trails. Some of the trails on Mt. Kinabalu are a little steep in places but the pace is slow so anybody of average fitness should have no problems. However the hike for Friendly Warbler is much steeper than any other trail we will do on this tour. Some trails can be rather muddy after rain. Early morning starts are the norm, either after an early breakfast or as a pre-breakfast excursion, there are also some night time activities. The climate on Mt. Kinabalu is relatively fresh while elsewhere it is tropically hot and humid. Rain is likely at times, most often in the form of afternoon thunderstorms. Be prepared for all eventualities.