Days 2 – 4    Cat Tien National Park
We will enjoy three days of birding at one of Vietnam’s premier birding sites: Cat Tien National Park. There are excellent trails starting right at the park headquarters for us to explore on foot and for areas further afield, such as Crocodile Lake, jeeps will be used. Cat Tien was the first national park to be established in southern Vietnam and it is one of the largest areas of lowland tropical forests left in the country. Forest cover here is a mixture of primary and secondary evergreen and semi-evergreen forest. There are also large areas dominated by grassland and bamboo.

Some really mouth-watering birds will be out main targets here with both Bar-bellied and Blue-rumped Pittas frequently seen here while Germain’s Peacock Pheasant can be quite abundant but always shy. Orange-necked Partridge is another speciality which will require some work but hopefully they will emerge from the undergrowth and show themselves; Scaly-breasted (Green-legged) Partridge should be easier and we hope to find some stunning male Siamese Firebacks on the track as we drive to Crocodile lake.

Our time in this forest should result in sightings of plenty of species of woodpeckers too, including some exciting ones such as the huge White-bellied Woodpecker, only exceeded in size by the prehistoric-looking Great Slaty Woodpecker. Pale-headed Woodpecker is a tough bird to catch up with but stands of bamboo at Cat Tien play host to this bird which should be vocal at the time we visit. Black-and-buff and Heart-spotted Woodpeckers are also there to be found along with three species of Broadbill and the Indochinese endemic, Grey-faced Tit-Babbler. This is also a good place to see lots of exciting species that are fairly widespread through Southeast Asia including wonderful Banded Kingfisher, Orange-breasted Trogon, Common Flameback, Greater Yellownape, Great Hornbill, Oriental Pied Hornbill, Blue-bearded Bee-eater, Siberian Blue Robin, Abbott’s Babbler, Black-and-red Broadbill, Scaly-crowned Babbler and Red Junglefowl; with so many species to look for we will be kept busy. At night we should be able to see Large-tailed Nightjar as well as magnificent Great Eared Nightjars and this is a good place to locate Blyth’s Frogmouth. Owls could include Collared Scops Owl and Brown Boobook.

For some variety there is some grassland and wetland birding. In these habitats we have our best chance of seeing scarce birds such as Lesser Adjutant, Wooly-necked Stork and Green Peafowl while commoner species should include Black-backed Swamphen, Chestnut-headed Bee-eater, Bronze-winged Jacana and Red-breasted Parakeet. Raptors watching can be rewarding here with the possibility of Black Baza, Collared Falconet and perhaps even Grey-headed Fish Eagle. Overnights at Cat Tien National Park HQ.

Day 5    Cat Tien NP - Dalat
There is time for some final early morning birding at Cat Tien National Park to look for any target species that we have not yet seen or simply to enjoy at greater length some of the birds we have already encountered; afterwards we will head up Highway 20 to the cooler climes of Dalat; after the heat of the lowlands the lower temperatures here will be nice. In the afternoon we will do our first birding in the highlands beginning our search for the rare Vietnamese endemics; Grey-crowned Crocias and Orange-breasted Laughingthrush. In addition to these two beauties, the very distinct local subspecies of Blue-winged Minla, Black-headed Sibia and Black-throated Sunbird can found here alongside many of the commoner species. The skulking Rufous-browed Flycatcher can be found in shady areas here, with White-spectacled Warbler in areas of forest with bamboo and Dalat Shrike Babbler can be found in the canopy. Overnight at Dalat.

Days 6 - 8    Dalat
The Dalat region provides us with a range of different forest habitats and a wide variety of birds most of which will be different from those we saw during our stay at Cat Tien. With three full days to spend in the excellent birding sites of the area and we will use our time wisely between them, using our guide’s local knowledge to find as many of the specialities as possible.

At Bidoup National Park we go to high altitude. Species such as Hume’s Treecreeper, Yellow-billed Nuthatch, Grey-crowned Bushtit, Vietnamese Cutia, Dalat Shrike Babbler, White-cheeked Laughingthrush and Black-crowned Fulvetta can be found in the remaining evergreen forest where the weather should be cool. However, the most sought-after species here is the beautiful and skulking endemic Collared Laughingthrush which we should be able to get excellent views of. In the ground layer of vegetation we will look for the tiny Grey-bellied Tesia and Pygmy Wren Babbler while in the foliage we should also see Ashy-throated Warbler and the colourful Mrs Gould’s Sunbird. There are loads of other birds to look for too with Little Pied Flycatcher, Orange-headed Thrush, Blue Whistlingthrush and Hill Prinia all likely.

Ho Tuyen Lam, a man-made lake just out of town, is set among pleasant pine forest and is a great place to look for some of the local habitat specialists including Indochinese Cuckooshrike, Slender-billed Oriole, Burmese Shrike, Red (Vietnamese) Crossbill and Vietnamese Greenfinch. The grassy understorey should also give us a chance to see Brown Prinia and the open nature of the habitat should allow us to get good views of Red-vented Barbet while the patches of mixed broadleaved forest here can contain Red-billed Scimitar Babbler, the local race of Blue-winged Minla, Chestnut-vented Nuthatch and Green-backed Tit. Of course there are some very special species to find and this location is where we have a good chance at Vietnamese Cutia, Black-headed Parrotbill, Grey-crowned Crocias and Yellow-billed Nuthatch. We will also be looking out for Vinous-breasted Myna, Black-collared Starling and Black-headed Sibia in this area.

Further birding spots will give us further chances to find the key species in Orange-breasted Laughingthrush and Grey-crowned Crocias but also other regional highlights like Indochinese (Annam) Barbet calling from the canopy, the cute Grey-crowned Bushtit, Rufous-backed and Black-headed Sibias plus Vietnamese Greenfinch. More widespread species usually include Mountain Fulvetta, Grey-cheeked Warbler and Black-throated Sunbird. Overnights at Dalat.

Day 9    Dalat - Di Linh
We can enjoy a final morning of birding around Dalat, which of the birding sites in the area we visit will depend on which species we are still looking for or anything we want a better look at; this could be a time for some photography if we have already found all of our targets.

Later we will drive for around 3 hours to the town of Di Linh from where we will make the short drive to Deo Suoi Lang (Nui San pass), a forested area in the mountains which is a great spot to search for a number of the Dalat plateau specialities including some of the key species of Laughingthrush. This is a group of birds that can be quite tough to see at times but here we have another good chance of finding White-cheeked, Black-hooded and Orange-breasted Laughingthrushes. Black-crowned Parrotbill will also be high on our list of priorities at this site as it feeds on seeding trees or within mixed flocks as will the incredible Long-tailed Broadbill. Overnight at Di Linh.

Day 10    Deo Suoi Lanh - Ho Chi Minh City  - 1st April
An early morning visit to Deo Suoi Lanh to look for other exciting possibilities. Birding along the road and down some small trails we have a very good chance to find a superb Blue Pitta as well as Indochinese Green Magpie, Spotted Forktail and with some luck, Green Cochoa which should be calling at this time of year. Necklaced Barbet will be another target if not already seen and Black-chinned Yuhina can usually be found here in small flocks, along with Grey-faced Tit Babbler, and Yellow-vented Green Pigeon, a bird with a very patchy distribution, is another possibility. With other species we hope to see being the stunning Red-headed Trogon, colourful Clicking Shrike Babbler and Maroon Oriole we should have a colourful finish to the trip.

In the afternoon we make our way back to Ho Chi Minh City for the end of our trip arriving in the late afternoon/early evening in time for flights home. 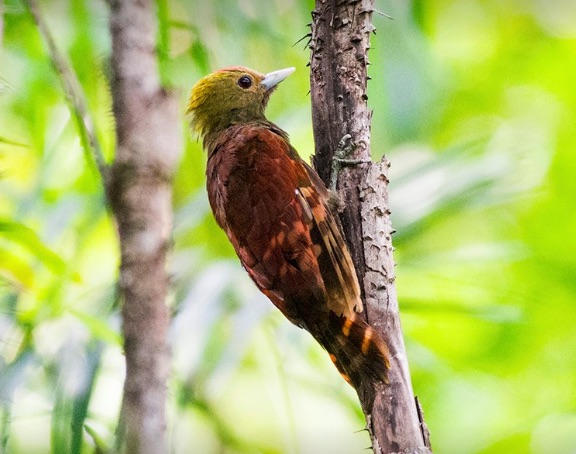 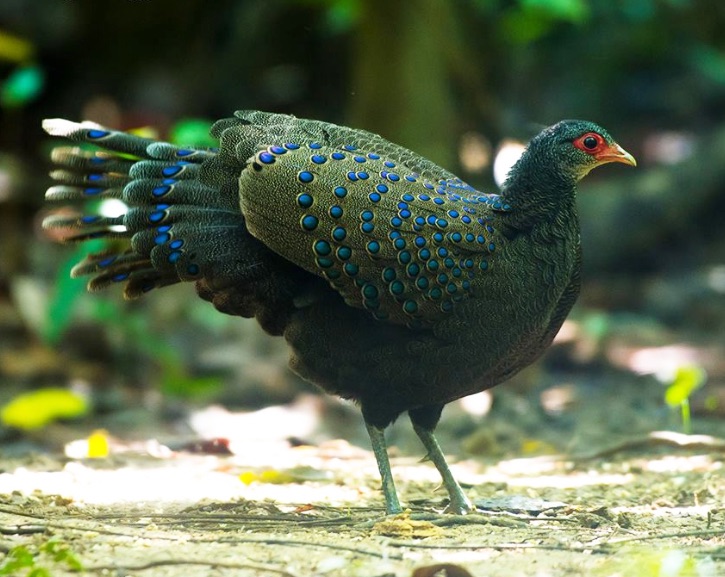 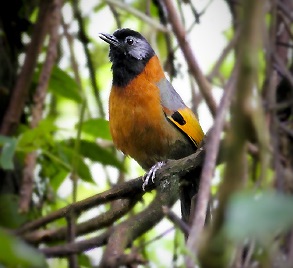