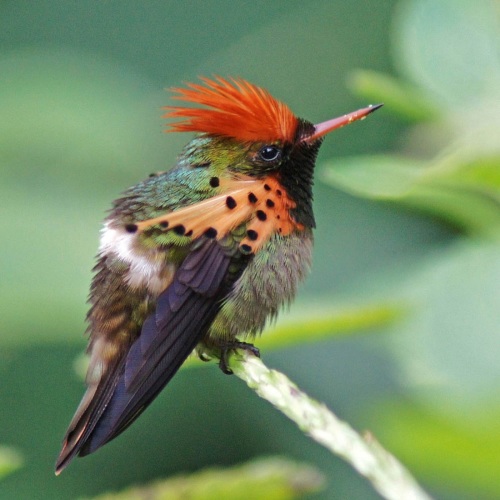 The tropical islands of Trinidad and Tobago are situated just a few miles off the coast of Venezuela. The island’s ornithological riches have long attracted birdwatchers and serve as a perfect introduction to the avifauna of the South American continent. Despite the relatively small size, the islands are extremely diverse and conveniently coupled with relatively easy birding conditions in a relaxed, friendly atmosphere. At the famous Asa Wright Nature Centre we’ll receive a warm welcome and connect with some of the islands 68 or so bird families - bellbirds, jacamars, toucans, woodcreepers, antbirds, manakins, and gnatwrens to mention just a few of the Neotropical groups to be found in the centre’s grounds.  And there are two endemic species to be found on this tour - Trinidad Piping-Guan and Trinidad Motmot. Hundreds, sometimes thousands of Scarlet Ibis provide an indescribable spectacle at they fly into roost in the mangroves, and we’ll also have the eerie experience of seeing the world’s most accessible Oilbird cave, as well as seeing the bizarre displays of Golden-headed and White-bearded Manakins in the nature centre's grounds. Later in the tour we transfer to the tiny island of Tobago which hosts a number of key species including Rufous-vented Chachalaca, stunning Blue-backed Manakins and the range restricted White-tailed Sabrewing. Close by, Little Tobago Island offers nesting Brown and Red-footed Boobies, as well as Red-billed Tropicbirds and many other fantastic species - a treat not to be missed. This is a rather luxurious and relaxed-paced birding tour, where you can enjoy the sunshine and sip rum punch whilst enjoying a veritable kaleidoscope of brightly coloured tropical birds from the veranda. So for some amazing winter birding there's nowhere better than the tropical paradise islands of Trinidad and Tobago.

Day 1   UK - Port of Spain, Trinidad  - 27th January
Arrival at Piarco International Airport in Port of Spain, Trinidad and transfer about 50 minutes to the world famous Asa Wright Nature Centre andlodge where we will spend the next 6 nights. If we arrive while there is still daylight you'll get your first chance to enjoy the vista from the Centre's veranda and see some of the many colourful birds that frequent the feeders here.

Day 2   Asa Wright - Aripo Agricultural Station
The action begins in earnest at first light. What can only be described as a birding ‘frenzy’ develops just off the veranda around 6 am. The feeders at Asa Wright Nature Centre (AWNC) must surely be some of the best in the world and we’ll find ourselves overwhelmed by hummingbirds, tanagers, honeycreepers, euphonias, flycatchers and much more; White-chested Emerald, White-necked Jacobin, Blue-chinned Sapphire, Rufous-breasted and Little Hermits, Copper-rumped Hummingbird, Crested Oropendola, Blue-gray, Palm, White-lined, Silver-beaked and Turquoise Tanagers, Barred Antshrike, Tufted Coquette, Purple and Green Honeycreepers, and Violaceous Euphonia could all be seen. After breakfast we will explore the grounds and trails of the nature centre where species such as Double-toothed Kite, Scaled Pigeon, Black-tailed Tityra, Common Black-hawk, Gray-lined, White and Zone-tailed Hawks, Channel-billed Toucan, Bearded Bellbird, Piratic and Boat-billed Flycatchers, Squirrel Cuckoo, Tropical Pewee, Tropical Kingbird, Trinidad Motmot, Yellow-olive and Yellow-breasted Flycatchers and a host of other great birds can be found. We should also be treated to the leks of Bearded Bellbird, and Golden-headed and White-beared Manakins. Further birding on site in the afternoon may produce Cocoa and Spectacled Thrushes, Gray-fronted Dove, Green-backed and Guianan Trogons, Channel-billed Toucan, Chestnut Woodpecker, Rufous-browed Peppershrike, both Turquoise and Bay-headed Tanagers, Green Hermit, Tufted Coquette, Black-throated Mango, Forest Elaenia, Ochre-bellied Flycatcher, Yellow Oriole, White-necked Thrush, Rufous-breasted Wren, White-flanked Antwren and Long-billed Gnatwren. Fortunately, the AWNC will be our base for the next six nights giving us plenty of time get to grips with all of these new birds and families.

After taking an early afternoon break we head out again around 4.00pm (taking a hot dinner with us) for a night-birding excursion.  The first stop, still in good birding light, will be for Fork-tailed Palm-Swifts, Sulphury Flycatchers and perhaps Moriche Oriole. We then drive a short distance north to the Aripo Livestock Station. After a picnic supper, we’ll slowly drive the dirt tracks for White-tailed Nightjar and Common Pauraque, with Common Potoo and Rufous Nightjar being more remote possibilities. Barn Owl is also possible as is Tropical Screech-Owl, though the latter make take some time to locate.

Day 3   Asa Wright - Northern Range - Blanchisseuse Road
Much of the day will be spent exploring the Northern Range as we make frequent stops along the Blanchisseuse Road continuing through the mountains to the village of Morne la Croix, where we’ll break for afternoon tea and enjoy a fine display of parrots as they head to roost. With any luck we will find Swallow-tailed Kite, Bat Falcon, Collared Trogon, Ornate Hawk-Eagle, Channel-billed Toucan, Short-tailed Hawk, Streaked and Euler’s Flycatchers, Rufous-tailed Jacamar, Blue-headed Parrot, Lilac-tailed Parrotlet, Orange-winged Parrot, Collared Trogon, Golden-olive, Red-rumped and Chestnut Woodpeckers, Ferruginous Pygmy-Owl, Stripe-breasted Spinetail, Cocoa and Plain-Brown Woodcreepers, Dusky-capped and Slaty-capped Flycatchers, Rufous-breasted Wrens, Long-billed Gnatwren, Golden-fronted Greenlet, Speckled and Hepatic Tanagers and Yellow-rumped Cacique. The North Range is also home to the endemic Trinidad Piping-Guan, which is possible but tough to find though we do have plans for a dedicated Piping-Guan excursion later in the tour. The day should also provide an opportunity to observe the curious world of Army and Leaf-cutter Ants.

Day 5   Asa Wright - SW Trinidad Marshes - West Coast
We depart early, pre-dawn in fact, to arrive at the Oropouche River for sun rise. Spotted Tody-flycatchers are present in the marshes and restricted to south-western Trinidad, and Pinnated and Stripe-backed Bitterns, Striped Cuckoo, Black-crested Antshrike, Pied Water-tyrant and White-headed Marsh-tyrant, Red-breasted Meadowlark and Yellow-hooded Blackbirds, Yellow-chinned Spinetail, Green Kingfisher and Masked Yellowthroat could also be seen in this excellent area before the heat of the day suppresses bird activity and we head for some shade. In mid-morning we head north to an extensive area of tidal mudflats along the west coast – locally known as “Waterloo”.  This area features many good birding spots and year round attractions including Magnificent Frigatebird, Brown Pelican, Neotropic Cormorant, Tricolored Heron, Yellow-crowned Night-Heron, Black-necked Stilt, Southern Lapwing, Willet, Hudsonian Whimbrel, Greater and Lesser Yellowlegs, Semi-palmated and Black-bellied Plovers, Short-billed Dowitcher, Laughing Gull, Royal Tern and Black Skimmer.  We then travel just a few miles to the beachfront at Carli Bay looking out for gaudy Saffron Finches though they can be difficult to find in the heat of the day. This is also one of the better sites in Trinidad to find Rufous Crab-Hawk, a rather rare resident with perhaps no more than five breeding pairs on the island.

Day 6   Maracas St Joseph Valley - Caroni Swamp Bird Sanctuary
After a little more time at Asa Wright Nature Centre in the morning we head west to a private garden nestled high up in the hills overlooking the Maracas St Joseph Valley. Theo and Gloria Ferguson invite birders to their home for hummingbird watching par excellence - fourteen of the eighteen species of hummingbird recorded in T&T have been recorded here. We will be invited to sit, sip home-made juice and sample home-made cakes whilst watching the feeding frenzy happening just feet away.

Afterwards we’ll take a steady drive to the Caroni Bird Sanctuary Information Centre. Whilst waiting for our boat to depart roadside birds could include Rufous-browed Peppershrike, Straight-billed Woodcreeper and Masked Cardinal. Caroni Swamp comprises of about 40 square miles of mangrove, much of it protected. Our boat leaves at around 4.00pm under the leadership of an experienced tour guide who tours the swamp each day. The undoubted attraction is the sheer spectacle of hundreds/thousands of Scarlet Ibis coming into roost, but first we spend time navigating some of the mangrove channels for other specialties including Green-throated Mango, Greater Ani and Bicolored Conebill. Day-roosting Tropical Screech-Owls and a Common Potoo are sometimes found close to the water and we have a distinct chance of a kingfisher or two with Green, Ringed and American Pygmy all present in the swamp. Boat-billed Heron will be a major target and has a reputation for being the least confiding of the herons. Ruschenberger’s Tree Boa, Silky Anteater and Spectacled Caiman might also be seen on the trip before we moor up and wait for parties of Scarlet Ibis, Tricolored and Little Blue Herons and Snowy Egrets flying into roost. We arriving back at the dock at dusk and return direct to the AWNC for a slightly later than usual dinner.

In the late morning we take the drive to the airport and transfer to Tobago where the birding begins in the wetlands at the south-west end of the island where Black-bellied whistling-Duck, White-cheeked Pintail, Masked Duck, Least Grebe, Anhinga, Purple Gallinule, Southern Lapwing and Wattled Jacana will be among the species possible. Three nights at The Blue Waters Inn.

Day 9    Blue Waters - Tobago Rainforest
An entire day dedicated to birding the Tobago Rainforest focusing on the Main Ridge Forest Reserve and Gilpin Trace. A number of important species can be found here, not least of which is White-tailed Sabrewing, a range restricted hummingbird found only on Tobago and on the Paria peninsula of Venezuela. Other species of great interest for us could include Rufous-vented Chachalaca, Great Black-hawk, Giant Cowbirds, Rufous-breasted Hermit, White-necked Jacobin, Collared Trogon, Rufous-tailed Jacamar, Red-rumped and Golden-olive Woodpeckers, Stripe-breasted Spinetail, Cocoa and Olivaceous Woodcreepers,, Yellow-legged and White-necked Thrushes, Venzualan and Fuscous Flycatchers, Rufous-breasted Wren and another big target, Blue-backed Manakin.

Day 10   Blue Waters - Little Tobago Island
We can relax a little in the morning at the Blue Waters Inn and bird locally in and around Speyside and the nearby forest areas to catch up with any species missing from our stay on Tobago. These might include Pale-vented Pigeon, White-tipped and Eared Doves, Rufous-tailed Jacamar, White-fringed Antwren, Brown-crested Flycatcher, Grey Kingbird, Caribbean Martin, Scrub Greenlet, Black-faced Grassquit and Shiny Cowbird.

In the afternoon we take a boat trip out to Little Tobago Island. The boat rather conveniently leaves from the parking lot at the Blue Waters Inn and takes us across to the island where we can enjoy the seabird colonies from an ideally situated overlook. Here, Red-footed and Brown Boobies should be present along with charismatic Red-billed Tropicbirds flying past at exceptionally close range.

Day 11   Departure via Trinidad - UK
We may have time for some local birding on Tobago before we must bid goodbye to this tropical island gem and transfer to Trinidad for our respective flights home from Port of Spain.

Day 12   Arrival in UK - End of Tour  - 7th February
Morning arrival in London and the conclusion of a wonderful tour.

Group size: Limited to a maximum of 10.

Included in cost:  Accommodation in twin rooms en-suite, all meals from dinner on Day 1 to breakfast on Day 11, picnic lunches if necessary,  bottled water, transport throughout including the inter-island return flight to Tobago, all park entrance fees, services of local guides/drivers and gratuities.
Not included:  International airfare, insurance, departure tax, alcoholic and soft drinks, snacks, lunch on Day 11, and any items of a purely personal nature such as laundry, telephone charges, or any servics not included in the itinerary etc.
Accommodation: Good to very good throughout tour.
Tour Code: A standard birding tour in relatively comfortable conditions. Expect some long days in the field in relatively warm-to-hot and humid conditions and walks on forest trails of up to two miles in length.  A few early morning starts will be required to get to key locations for first light. Most of the bird activity will take place in the morning and evening, and there should be a chance to relax in the hottest part of the day. Lightweight clothing for the field and evenings will be sufficient, and shorts and sandals can be worn in some areas. A fleece or sweater may be required for cooler evenings, and it would certainly be worth bringing a lightweight rain jacket. Biting insects (mosquitoes and chiggers) can be a minor nuisance in some area and a good insect repellent is recommended.