DAY 1  Arrival in Kilimanjaro - 5th June
Arrival at Kilimanjaro International Airport (KIA) and transferred to our beautiful house on Kilimanjaro Golf Club. If times allow we will do a little birding in the area around the house (350 species recorded on the estate).

DAY 2  Lark Plains
We’ll make an early start to reach the vast expanse of the Lark Plains 60kms away, while the air is still cool and here our priority bird will be the range-restricted Beesley’s Lark that we’ll aim to find promptly with the help of a Maasai community guide who monitors the site. Other larks to look out for include Athi Short-toed Lark and Short-tailed Lark, and we’ll search hard for Temminck’s and Double-banded Coursers, Capped Wheatear, Lanner and several bustard species. Lesser Kudu and Gerenuk are sometimes found among the acacias, while Maasai Giraffe, Thomson’s Gazelle and Plains Zebra should be easier to encounter.

Day 3   Tarangire National Park
We have a very early start and head for Tarangire (2 hours in car). Upon arrival, we’ll be greeted with substantial flocks of weavers including Rufous-tailed Weaver, Red-billed and White-headed Buffalo-Weavers, Grey-capped Social Weaver, Chestnut Weaver, Red-billed and Cardinal Queleas and delightful Black Bishop, plus Speckled Pigeon, Lilac-breasted Roller, Chestnut Sparrow and Blue-capped Cordon-bleu. As we drive further into the park we can expect a variety of game and the good birds continue to flow; Helmeted Guineafowl, Red-necked and Yellow-necked Spurfowl, African Crake, Red-bellied Parrot, African and Diederik Cuckoos, Speckle-fronted Weaver, Ashy and Hildebrandt's Starlings, a variety of waxbills including the stunning Green-winged Pytilia and Crimson-rumped Waxbill.

Among some of this park’s dry-country specialities we hope to see  African Pygmy Falcon, Eastern Chanting Goshawk, Buff-crested and Hartlaub’s Bustard, Orange-bellied Parrot, Yellow-collared Lovebird, White-bellied Go-away-bird, the peculiar Mottled Spinetail that should be found close to large Baobab trees, Red-and-yellow Barbet, Grey, Red-billed and Von der Decken’s Hornbills, Banded Parisoma, Northern Pied Babbler, Black-crowned Tchagra, Ashy Starling, Jameson’s Firefinch, Cut-throat, Purple Grenadier and a good selection of resident raptors will include several vulture species, harriers and eagles. Game should be encountered throughout the drives here including good numbers of African Elephant, and there is a good chance of finding predators here such as Lion, Leopard and if we are very lucky, Wild Dog.  And we’ll look out for small groups of Black-faced Sandgrouse as they visit the tracks in the fading light. Night at Kilimanjaro.

DAY 4   Same - Mkomazi National Park
We will leave early in the morning heading for Same. About 40 km north of Same we make a little detour to some very nice habitat just short of Nyumba ya Mungu Dam. Species to be expected here includes Rufous and Scaly Chatterer, Pringle´s Puffback, Southern Grosbeak Canary, Yellow-necked Weaver, Pygmy Batis, Somali Bunting, Pink-breasted Lark, Abyssinian White-eye, Red-fronted Warbler and many more. After that we will head for a small woodland just outside Mkomazi National Park, where we will search for species such as Tsavo, Black-bellied and Hunter´s Sunbird, Red-and-yellow, Black-throated and D`Arnaud´s Barbets, Grey Wren-Warbler, Fischer´s Starling, Straw-tailed Whydah and  more. Night at Elephant Lodge.

We will see plenty of other birds as well before driving  towards Magamba Forest in West Usambara where we will camp at the old sawmill. Other possibilities for today include East Coast Boubou, Striped Pipit, Grey-olive Greenbul and  Eastern Golden Weaver, Night Magamba Forest.

DAYS 6 - 7  Magamba Forest - West Usambaras
We wake up to the spectacular morning choir in Magamba Forest and start to search for the endless numbers of good birds in this forest. In particular we will look for megas such as Usambara Ground Robin, Usambara Akalat, Usambara Thrush, Usambara Weaver, Usambara Double-collared Sunbird, Usambara Akalat, Montane Tiny Greenbul,  the awesome  Füllerborn´s Black Boubou and much-wanted Spot-throat.

DAY 8  Magamba Forest - Amani Forest, East Usambaras
We will pack up camp early in the morning and drive down to the bottom of the forest and bird our way up. This forest have many surprises yet to yield, so stay tuned. After morning birding we will start heading towards the legendary Amani Forest in East Usambara, crossing a broad valley that separates the East Usambaras from the West Usambaras. We will lodge at the forest headquarters and bird the area around the headquarter this afternoon. If we are lucky, we will find the elusive Usambara Eagle-Owl at night. Night at Amani Forest Park HQ.

DAYS 9 - 10  Amani Forest, East Usambaras
Two full days birding in the awesome Amani Forest will see us target three megas:  Kretschmer´s Longbill, Sharpe´s Akalat and the awesome Long-billed Forest Warbler (Tailorbird). We will be leaving camp early in the morning, drive for about half an hour to the site for these three endemic species and then spend the first afternoon birding around the Park HQ The second day will be spent keying in on any new species, and there's rather a lot to find! Some of our target species include Olive Ibis, Black-fronted Bushshrike, Pale-breasted Illadopsis, Red-tailed Ant-Thrush, Fischer´s Turaco, Eastern Nicator, Chestnut-fronted Helmetshrike, Little and Shelley´s Greenbuls, Banded Green and Amani Sunbirds, Moustached Tinkerbird, Short-tailed Batis, Uluguru Violet-backed Sunbird, Green-headed Oriole,  both Waller´s and Kenrick´s Starling and Green Twinspot.

DAY 11   Amani - Same/Mkomazi NP
We will spend the morning birding downhill from the Park HQ looking for species such as Crowned Eagle, Black Sparrowhawk, Mombasa Woodpecker, Narina Trogon, Pallid Honeyguide, Green-backed Honeybird, Pale Batis, the much-wanted Usambara Hyliota, Ashy and Little Yellow Flycatchers, Blue-mantled Crested Flycatcher, Yellow-streaked, Fischer´s and Placid Greenbul, Plain-backed Sunbird, Dark-backed Weaver and Red-throated Twinspot amongst others.  After morning birding we will start our drive towards Same and should have time to some some late afternoon birding next to Mkomazi NP. Night in Same.

DAYS 12   Yabello - Lake Langano - Bishan Gari
Depending on which species we still need we will either bird areas close to Mkumazi National Park or the area near Nyumba ya Mungu Dam this morning before driving back to Kilimanjaro. Night in Kilimanjaro.

Day 13   Arusha National Park
We can spend the whole day in the habitat-rich Arusha National Park where we’ll start by checking the high forest for a variety of species including the mighty Crowned Eagle, Hartlaub’s Turaco, Bar-tailed and Narina Trogon, African Black Swift, African Dusky Flycatcher and Stripe-cheeked Bulbul, plus a good chance of an encounter with a mixed monkey party that could include Syke’s and Vervet Monkeys and Guereza Colobus. Later, we’ll move down the crater rim to some open areas of scrub and marsh where we’ll look for Scaly and Hildebrandt´s Spurfowl, Cinnamon-chested Bee-eater, Spot-flanked Barbet, Montane White-eye, Abyssinian Crimsonwing, Rüppel´s Robin-Chat, Pangani Longclaw, Singing Cisticola, African Stonechat, Cape Robin-Chat and numerous weavers and sunbirds, including Golden-winged. Taking another wooded trail, we’ll encounter troops of Olive Baboon and maybe a Harvey’s Duiker skulking in the undergrowth. At the ephemeral marshes, we’ll look for near-endemic Taveta Golden Weaver that usually nests nearby but this is subject to variations in the water level. Black Crake, Red-knobbed Coot, African Jacana, a variety of waterfowl including White-backed Duck, plus Giant and Malachite Kingfishers can be expected here, and we’ll search hard for Lesser Jacana that is sometimes found here too.

We’ll find our way to the Momella Lakes where we should encounter large numbers of Lesser Flamingo and smaller numbers of Greaters, plus Little Grebe, Southern Pochard, Black-crowned Night Heron, Scaly Francolin, White-fronted Bee-eater, Moustached Grass Warbler, Long-tailed Fiscal and maybe the scarce Maccoa Duck as this is one of their last refuges. Bushbuck and Common Waterbuck should be visible along the water’s edge. After a picnic lunch by the lakes, we’ll ascend the forested slopes of Mount Meru where we’ll try our luck with a “holy” trinity of forest starlings (Abbot’s, Kenrick’s and Sharpe’s), Cinnamon-chested Bee-eater, Black Cuckoo-shrike, Cinnamon Bracken Warbler, Black-throated Wattle-eye, Malachite Sunbird, and Abyssinian Crimsonwing. There is a slim chance we may glimpse one of the Lammergeier that lives atop this huge volcano so eyes will be checking on the skies! And what a way to end our time in Tanzania. Night at Kilimanjaro.

DAY 14   End of Tour - 18th June
Transfers to the airport and end of an exciting African adventure. 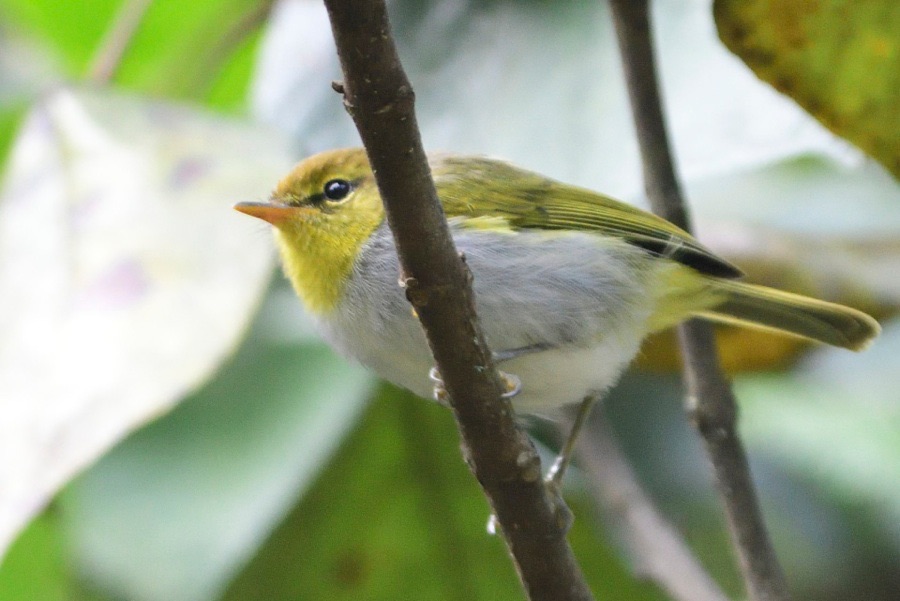 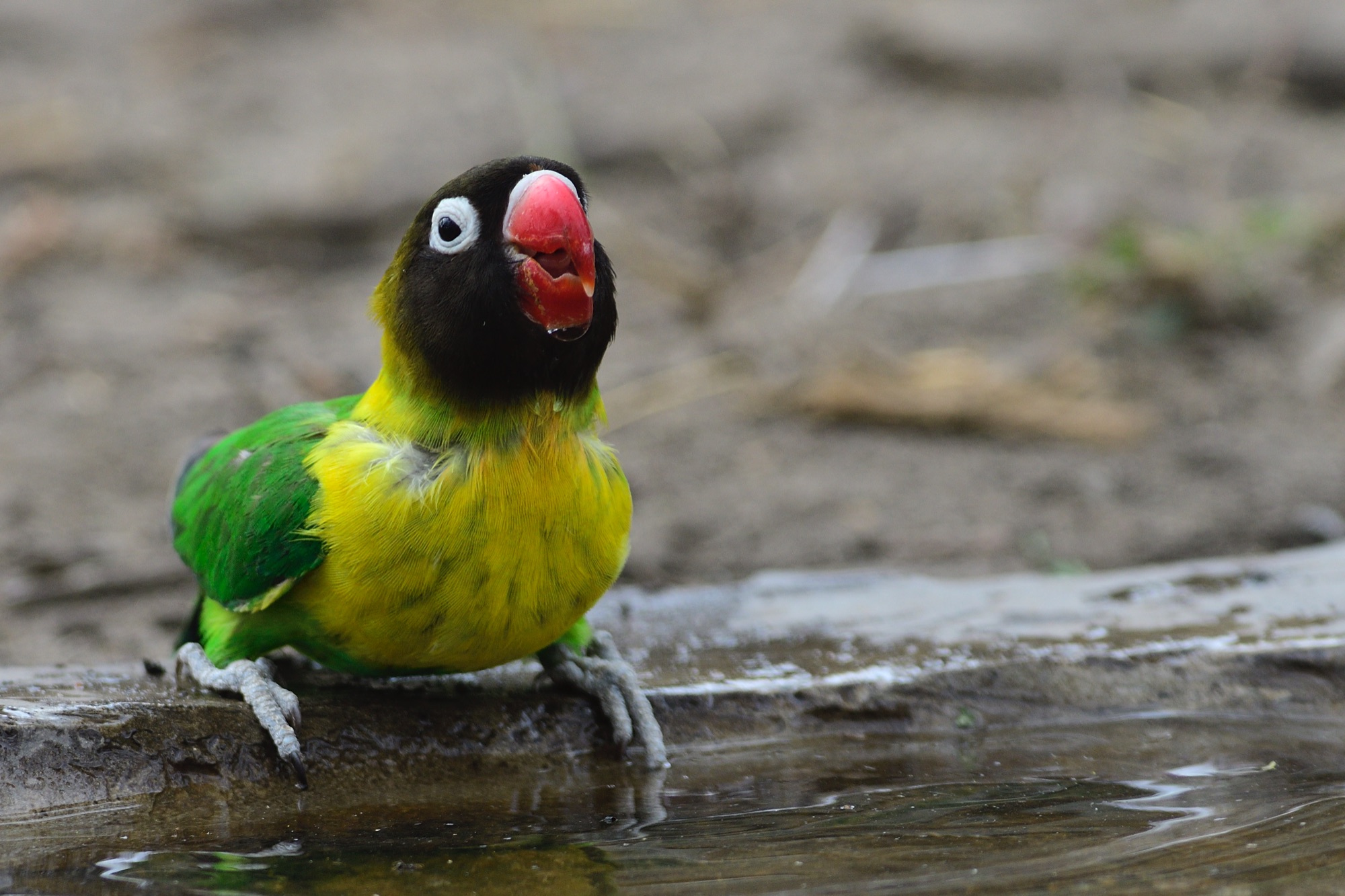 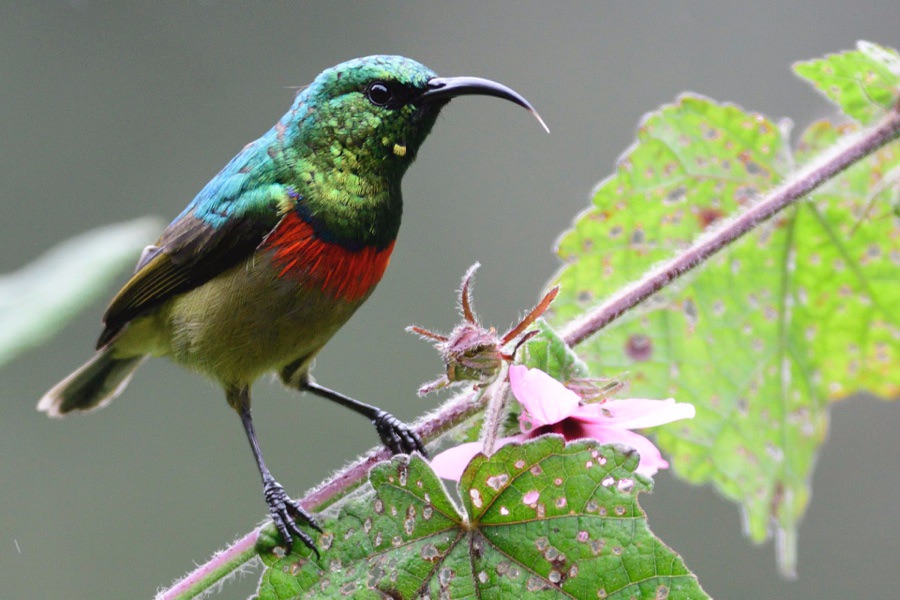 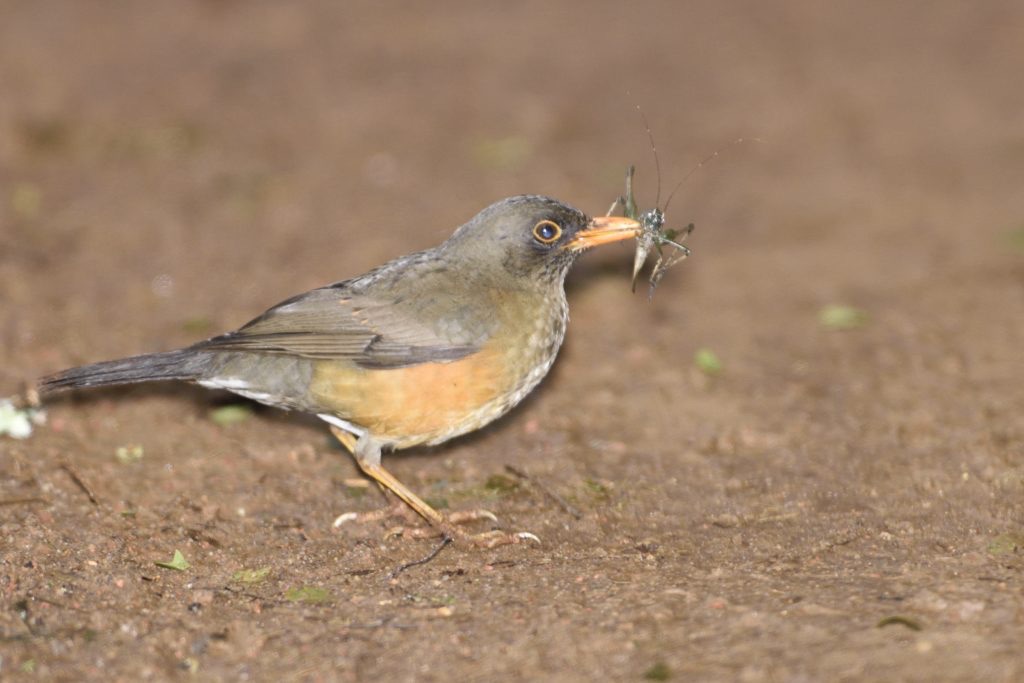 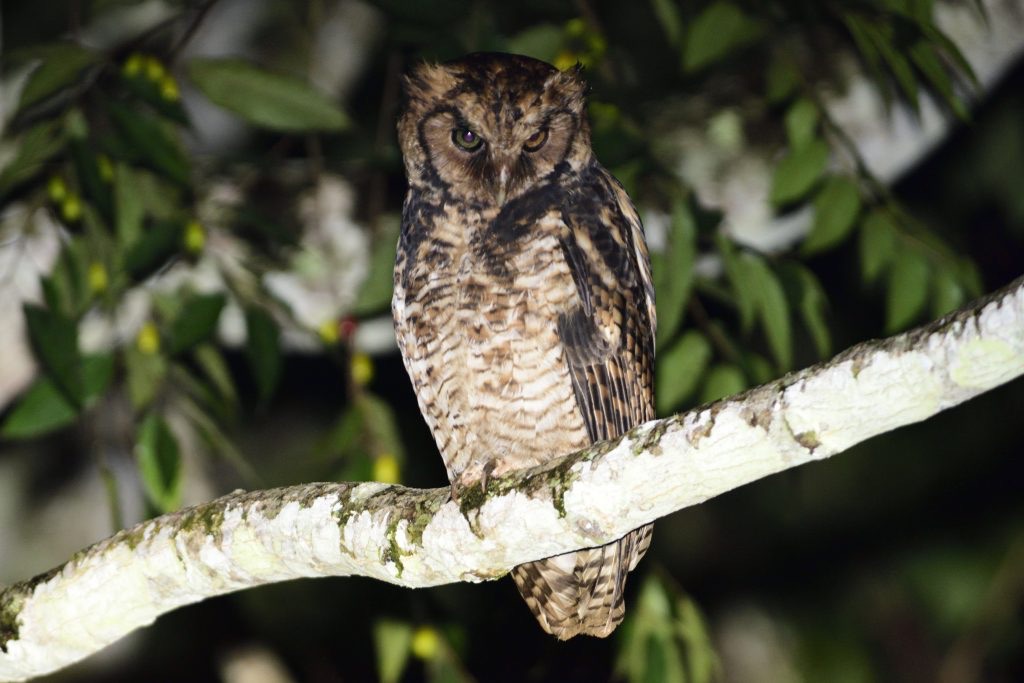 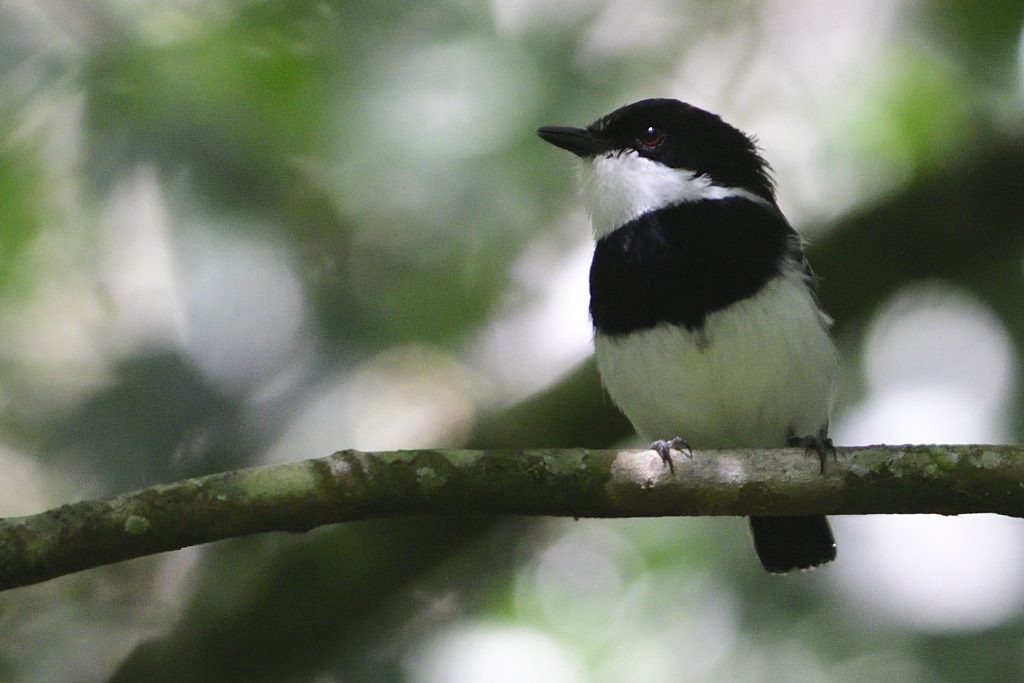 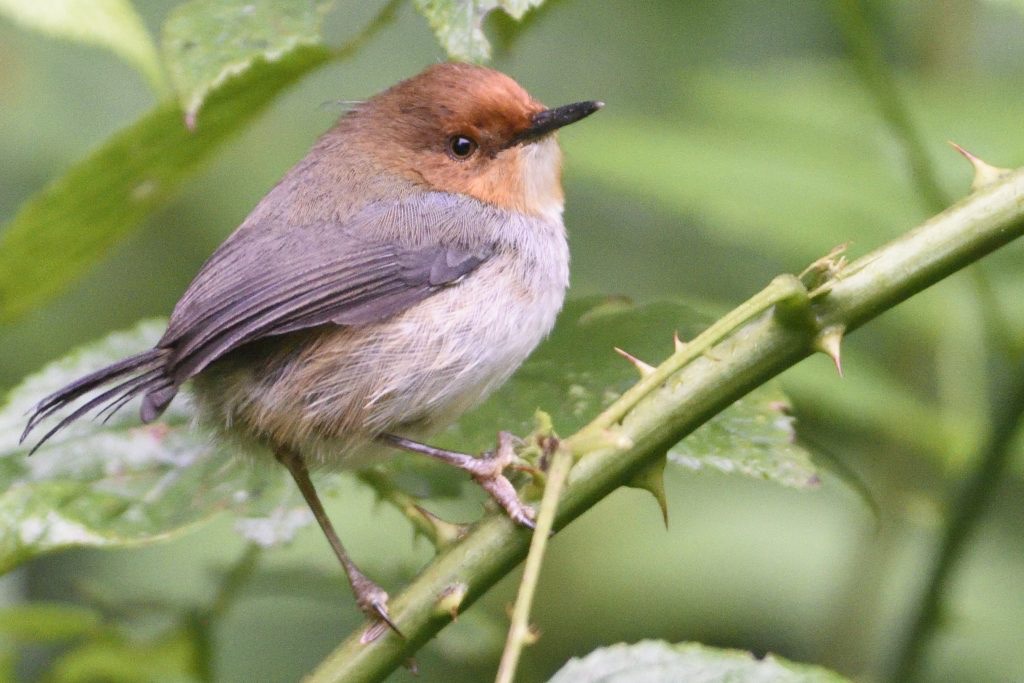 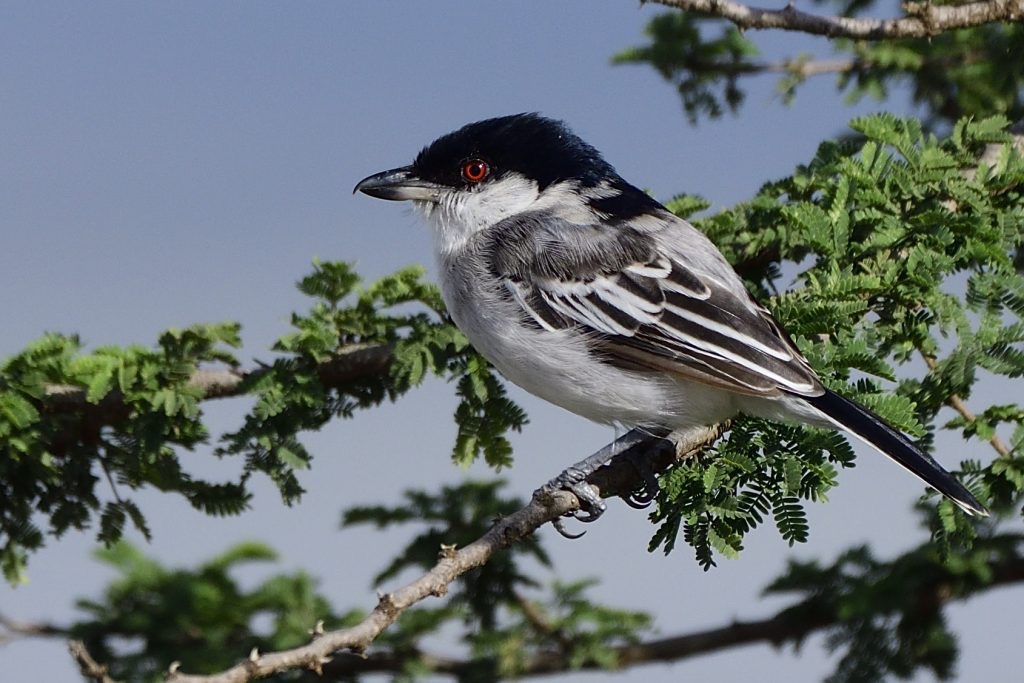 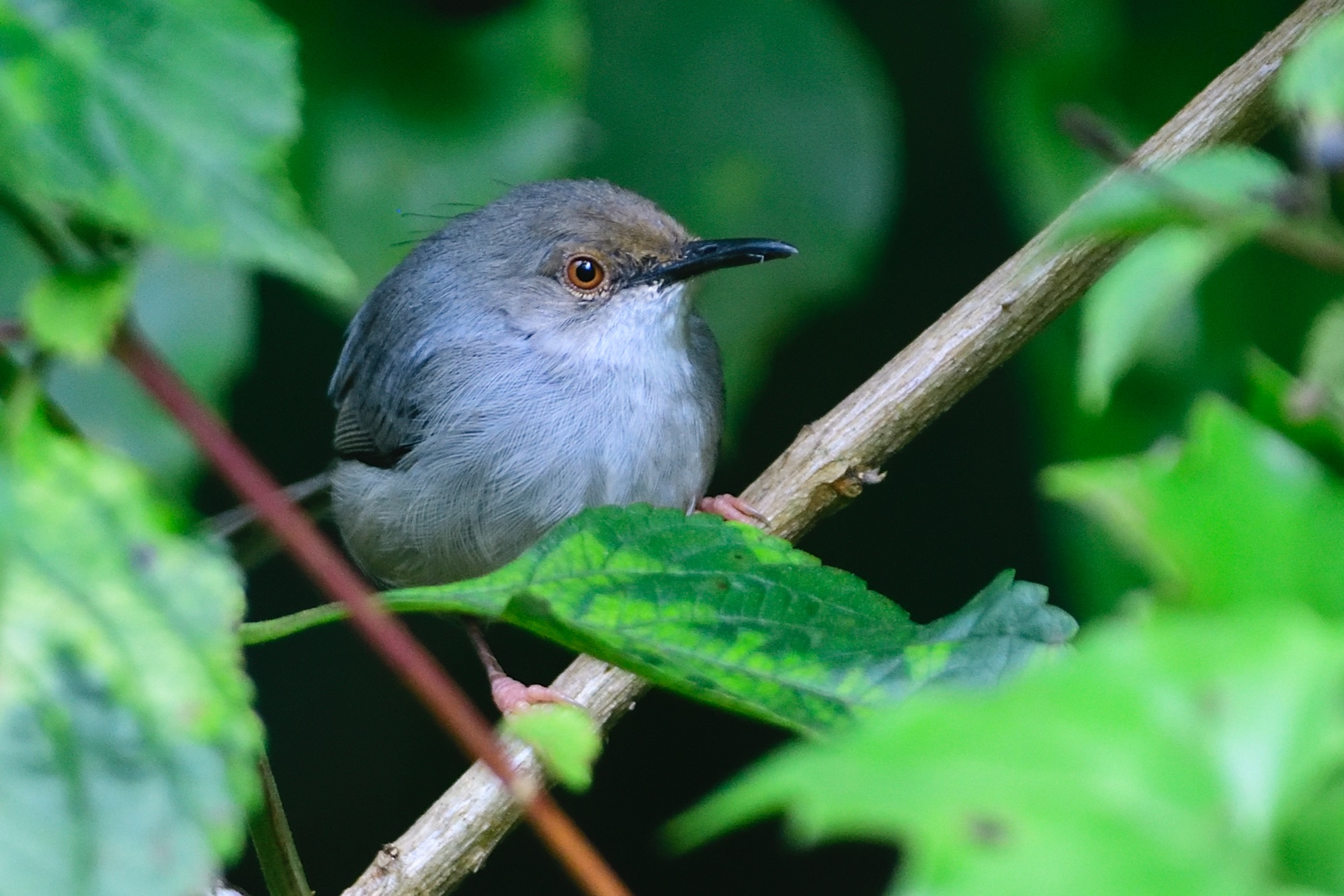 All photos copyright Per Holmen