The list of highlights above, seen on Zoothera Birding’s second winter tour to South Korea, illustrates exactly why this country remains an exciting birding 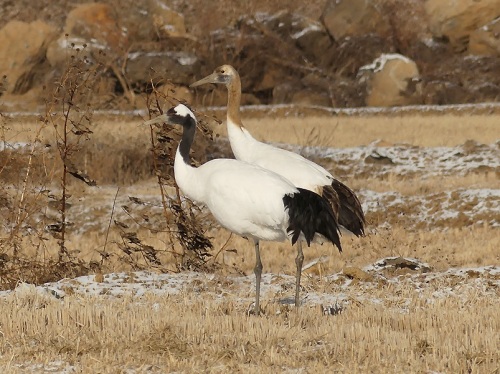 destination. Once again we found an extremely high proportion of our target species with most of them being seen more than once, allowing us to feel like we “knew” the birds rather than just a one off experience. Beginning near Seoul we began with woodland birding at the National Arboretum where the undoubted highlight was Solitary Snipe. Although cold the dawn flypast of Red-crowned and White-naped Cranes at Cheorwon was superb and from here we went south of Seoul to the forest at Namhansanseong for Hazel Grouse followed up with the Han River for Steller’s Sea Eagle. From here we headed to the northeast coast and enjoyed birding along the harbours, headlands and beaches, as well as a boat trip, for Gulls, Alcids, Divers and Sea Ducks. We then moved along the south coast visiting the Nakdong Estuary, Junam Reservoir and Suncheon Bay all of which provided exceptional quality birding. Heading up the west coast we gorged our eyes on half a million Baikal Teal, got close to Saunder’s Gull, studied the features of Pallas’s Reed Bunting before finishing the trip with more views of the superb Steller’s Sea Eagle. For a wide variety of birds and a number of rare and range-restricted species, South Korea is a great country for a mid-winter birding trip.