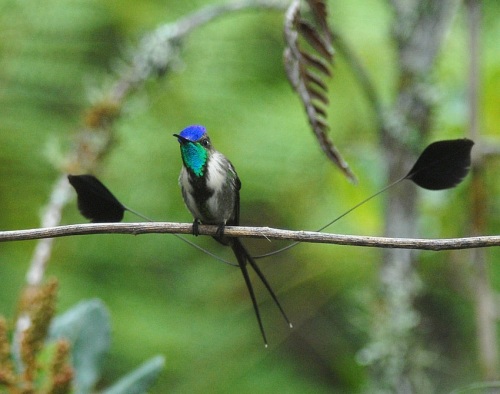 This was Roger Ahlman’s second trip that he has led for Zoothera Birding to Northern Peru and the itinerary was considerably different from the first trip, mainly because things change in this part of Peru with new sites being found, new feeders set up and new trails. Even on this trip we ran out of time because we visited new sites that offered birds that have been diffcult in the past. The trip went without any problems or hick-ups and everybody stayed healthy. It was feared that the El Niño event this years would bring huge amounts of rain to western Peru and Ecuador, but we hardly had any rain, certainly not more than usual during the rainy season which is at this time of the year. As usual on a trip like this to such a diverse area as northern Peru there are both positive and negative surprises bird wise. On the negative account was dips on Yellow-scarfed Tanager and Speckle-chested Piculet, first time in about 15 visits that Roger has missed either of them. Tanagers in general are poorly represented in the list simply because we didn’t have enough time in the foothills/lower subtropics in the Abra Patricia area because we visited new places there.  D’Orbigny ́s Chat-Tyrant and Unstreaked Tit-Tyrant were, on the other hand, the first time Roger had seen in northern Peru. We also found other birds that are diffcult in the north like Striated Earthcreeper, Green-headed Hillstar and Stripe-headed Antpitta. On the rarity account we found Sora, Black-billed Cuckoo and Cliff Swallow. The event of the trip happened on the first morning at Pantanos de Ventanilla, just north of Lima, when we watched tens of thousands of Guanay Cormorants and Peruvian Boobies in a constant stream migrating south. Absolutely breathtaking! Of course we saw many of the star birds that make a visit to northern Peru so exciting, such as the incomparable Marvelous Spatuletail (see above photo), but on this trip maybe the stunning views of Pale-billed Antpitta might just have stolen the show. Just take a look at the tour report to see the full species list, which includes 562 species, 36 Peruvian endemics, 61 species of hummingbird and 83 species of tyrant-flycatcher. This is one tour that just keeps getting better and better and we can look forward to many more sites and many more birds on future tours.