Day 1    Arrival in Delhi  - 20th November
Following our early morning arrival in Delhi we will transfer to a nearby hotel for breakfast before heading to Sultanpur, a superb birding site just under 50kms from Delhi in Haryana state. The lake here is usually full of birds, with huge numbers of all the regular wildfowl including Indian Spot-billed Duck, Garganey, Comb Duck and Bar-headed, Greylag and Greater White-fronted Geese. Also prominent are Greater Flamingo, Black-headed Ibis, Painted Stork, sometimes Black-necked Stork, Purple Swamphen, and a good selection of waders including the stately White-tailed Lapwing. In the immediate vicinity we can find Grey Francolin, White-throated Kingfisher, Eurasian Wryneck, Indian Grey Hornbill, Coppersmith and Brown-headed Barbets, Indian Robin, Citrine Wagtail, Long-tailed Shrike, Grey-breasted Prinia, Lesser Whitethroat, Siberian Chiffchaff, Hume’s Leaf-warbler and Red Avadavat.  In particular we will search the stands of Acacia’s here as this is a reliable site for wintering Brook’s Leaf-Warblers and around the edges of the lake there are usually a few Sind Sparrows present, whilst some nearby fields often hold Indian Bushlark. This will be the perfect introduction to our birding in India before heading back to our hotel where we should have a little time to relax before our first dinner together. Night in Delhi.

Day 2   Delhi - Jaipur - Jhalana
After breakfast we will set out on the drive to the cultural city of Jaipur. As you will get used to in India, birds are everywhere and there will no doubt be numerous roadside stops along the way. Maybe a cracking White-tailed Lapwing will be patrolling a roadside pool, some stately Sarus Cranes will be spotted in a field, or a stunning Pallid Harrier will be watched hunting. But we are guaranteed some great sightings before reaching Jaipur. After lunch we will set out on a late afternoon jeep safari into the little-known Jhalana Safari Park, which has relatively recently built up a reputation for awesome Leopard sightings. This will be the focus of our visit but we will also see a good selection of birds such as Grey Francolin, Black Eagle, Long-legged and White-eyed Buzzards, Yellow-footed Green-Pigeon,  Indian Scops Owl, Spotted Owlet, Plum-headed Parakeet, Sirkeer Malkoha, Indian Golden Oriole, hopefully Indian Eagle Owl, Indian Nightjar, Yellow-crowned and Brown-capped Pygmy Woodpeckers, White-browed Fantail, Wire-tailed and Red-rumped Swallows, Brahminy Starling, Chestnut-shouldered Petronia, White-capped and Crested Buntings and much more. Night in Jaipur.

Day 3   Jhalana - Ranthambhore
We will do another jeep safari this morning and there's nothing quite like tracking these big cats! After an early lunch we will drive to Ranthambhore where we should hopefully have time to explore areas outside of the park where we can see a wide variety of dry country species including Grey Francolin, Indian Vulture, Indian Stone Curlew, Painted Sandgrouse, Isabelline, Variable and Desert Wheatear, Rufous-tailed and Greater Short-toed Larks and Blue Rock Thrush amongst others. Night at Ranthambhore.

Days 4 - 5   Ranthambhore National Park
The former Maharaja’s hunting preserve of Ranthambhore consists of mainly dry deciduous and thorny forest, with several large lakes, steep cliffs and old ruins dotted amongst this impressive jungle habitat. Our primary aim is to see Tiger here and by taking early morning and late afternoon jeep safaris into the park we will maximise our chances of seeing them as this is when they are most active. There is definitely nothing as exciting as tracking these marvellous animals and as we wait quietly at certain favoured locations we may be lucky and hear the alarm calls of Spotted Deer or Sambar indicating the presence of a large predator. We have a good chance of finding and observing them, sometimes at very close quarters if we are extremely lucky!

Day 6   Ranthambhore - Bharatpur
After breakfast we will continue our action-packed tou rby heading to the world famous Keoladeo Ghana National Park, more simply known as the world famous Bharatpur. Upon arrival we will visit some areas outside of the park where we could find Black Bittern, Painted Stork, Yellow-wattled Lapwing, maybe a few harriers, or even Black-headed and Red-headed Buntings. Night at Bharatpur.

Days 7 - 8   Bharatpur
We have two full days to explore Keoladeo National Park - better known as Bharatpur, which is just a short drive from our wonderful hotel. This is undoubtedly one of the finest reserves in the world and we will explore as much of the 29 square kilometres as possible on foot and by bicycle-rickshaw. Now that the new pipeline guarantees a constant water level this fine reserve should be back to its best and quite simply, birds are everywhere! Most of the species are obvious and easily seen and we will look for Sarus and Common Cranes, Black-necked, Woolly-necked and Painted Storks, Asian Openbill, Great, Intermediate and Cattle Egrets, Purple and Striated Herons, Black-headed Ibis, Eurasian Spoonbill, Pheasant-tailed and Bronzed-winged Jacanas and Oriental Darter. Skulking around the edges of the open water we may find Yellow and Black Bitterns, Brown Crake, Purple Swamphen or Citrine Wagtail. Ducks are also well represented and we shall search for scarcer species including Comb Duck, Ferruginous and Red-crested Pochard, as well as Cotton Pygmy-Goose, Lesser Whistling and Spot-billed Ducks amongst the huge flocks of commoner species that winter here. Waders will also be a feature and amongst more familiar species we should see Black-winged Stilt, Marsh Sandpiper, Temminck’s Stint and White-tailed and Red-wattled Lapwings. Once we have taken in all this, searching the trees and scrub will provide us with yet more new species such as  Indian Grey Hornbill, Yellow-crowned and Indian Pygmy Woodpeckers, Yellow-footed Green-Pigeon, Common Woodshrike, Ashy Prinia, Brown, Bay-backed and Long-tailed Shrikes, White-eared Bulbul, Red-breasted and Taiga Flycatchers, Purple Sunbird, Olive-backed Pipit, Ashy Drongo, Chestnut-shouldered Petronia and Baya Weaver. Warblers are also well represented and we  could see Indian Reed, Blyth’s Reed, Tickell’s Leaf, Brooks’s Leaf, Hume’s, Smoky and Greenish Warblers.

In the shaded areas and skulking under bushes there are Bluethroat, Orange-headed and Tickell’s Thrush and the superb Siberian Rubythroat. However, the prize bird is the virtually endemic and often hard to find Marshall’s Iora that frequents the denser stands of vegetation. Drier areas can produce Grey Francolin, Barred Buttonquail, Yellow-wattled Lapwing, Red Collared Dove, Sirkeer Malkoha, Rufous-tailed Lark and on our last couple of visits we have seen Indian Courser and Sociable Lapwing. During our time here we usually come across day roosting Spotted Owlet, Dusky Eagle-Owl and Large-tailed Nightjar, and we shall also visit a roost site for Montagu’s and Pallid Harriers. However, it is the raptors that are the reserve’s crowning glory, and in the skies above or perched in nearby trees we can see Eastern Imperial, Steppe, Bonelli’s, Booted, Crested Hawk and both Greater and Indian Spotted Eagles, Egyptian and Red-headed Vultures, Crested Serpent-eagle, Shikra, Oriental Honey-buzzard and Black-shouldered Kite. There are often one or two rarities lingering here and on previous visits we have seen Lesser Fish-eagle, Grey Bushchat, Small-billed Scaly Thrush and both Slaty-blue and Ultramarine Flycatchers. This is also a good place for sightings of other animals and we have previously seen Nilgai, Sambar, Chital, Indian Rock Python, both Jungle and Fishing Cats and Common Indian Mongoose. Nights at Bharatpur.

Day 9   Bharatpur - Agra - Chambal
Tearing ourselves away from here will be difficult but the lure of Agra and a visit to the incomparable Taj Mahal will be calling us. This is no mere building but an awe-inspiring mausoleum of ethereal beauty built by the Mogul emperor Shah Jahan in memory of his wife Mumtaz Mahal. This truly is one of the modern day wonders of the world and our eyes will inevitably be drawn to the beautiful architecture, but there are also numerous birds around the gardens and along the Yamuna River to keep even the most obsessive birders occupied if need be!

Once we have finished here we will drive to the wonderful Chambal Safari Lodge. There should be some time to have a walk around the extensive grounds in search of our first birds before dinner. At night it is sometimes possible to see Common Palm Civets leaving their day-roosting holes in some large trees in the gardens. Night at Chambal Safari Lodge.

Day 10   Chambal River
Set amidst extensive grounds the Chambal Safari Lodge is a perfect location to have our breakfast underneath the shady trees in the garden and it is often possible to see plenty of commoner birds such as Asian Koel, Hume’s Warbler, Coppersmith and Brown-headed Barbets and Taiga Flycatcher whilst enjoying a cup of tea. The resident naturalist should hopefully have staked out day roosting Brown Hawk-Owl or Indian Scops-Owl for us to look at as well! Then we will drive to the National Chambal Sanctuary where we will set out on one of the major highlights of this tour. The tranquil waters of the Chambal River are home to a flock of beautiful Indian Skimmer – one of the main ornithological prizes in India! It is often possible to get amazing close ups of this much-wanted species, so have your cameras ready. Birds are plentiful here and we will see numerous other water loving birds, including Bar-headed Goose, Small Pratincole, Great Thick-Knee, River Lapwing, both River and Black-bellied Terns and Lesser Pied Kingfisher. As we slowly cruise along the river it is sometimes possible to get views of Gangetic River Dolphin, whilst Marsh Mugger and the strange fish-eating Gharial are relatively common and are usually sunning themselves on the sand banks as we slowly drift past them. The sandy shore sometimes provides views of Chestnut-bellied Sandgrouse, Desert Wheatear, Sand Lark, Ashy-crowned Sparrow-Lark and several different races of White Wagtail, whilst overhead there is a good chance to observe Bonelli’s Eagle, Long-legged Buzzard and Grey-throated Sand-Martin. We will also make a special effort to find the localised Rufous-fronted Prinia that inhabits arid canyons in this area. Sometimes Common and Demoiselle Cranes are also present, or we may be lucky enough to find a huge Pallas’s Gull loafing at the water’s edge. We will return to the lodge for lunch before saying our farewells and setting out on the drive back to Delhi. Night in Delhi.

Day 11   End of Tour - 30th November
Early morning transfer to the airport and our return international flights back to the UK/Europe and conclusion of a wonderful tour.

If continuing with our Classic Himalayas tour, then after breakfast we will set out on the drive to Corbett National Park. 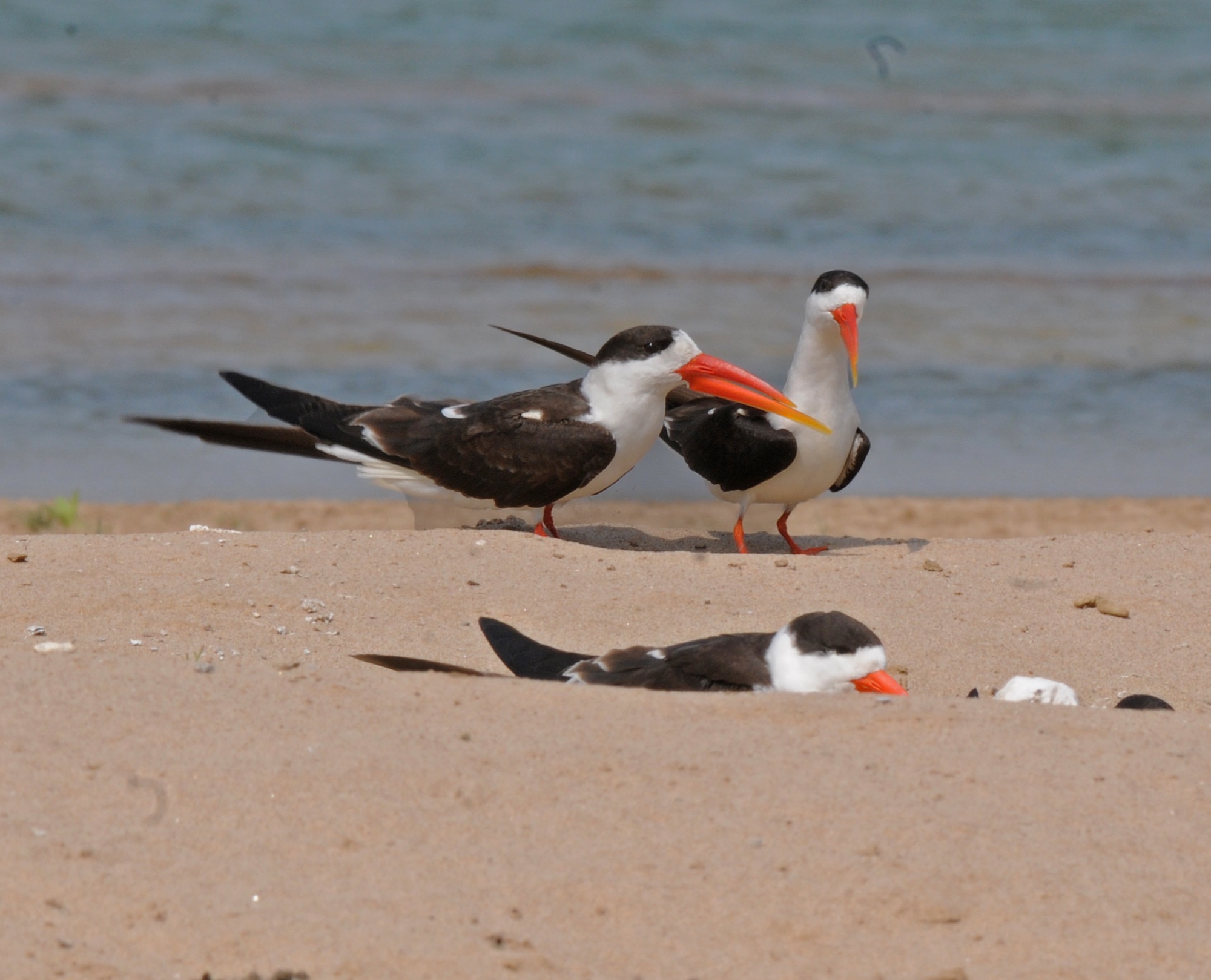 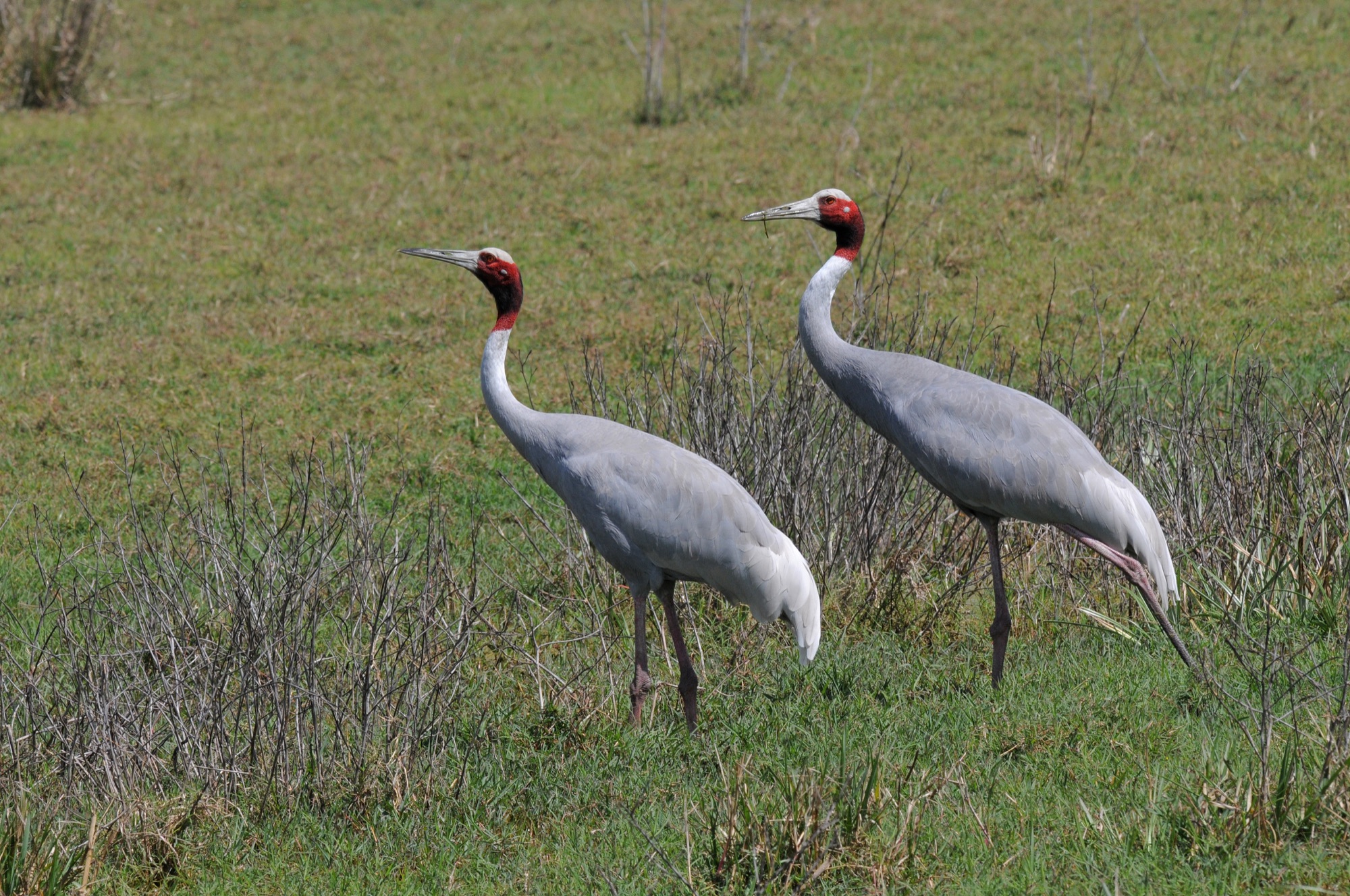 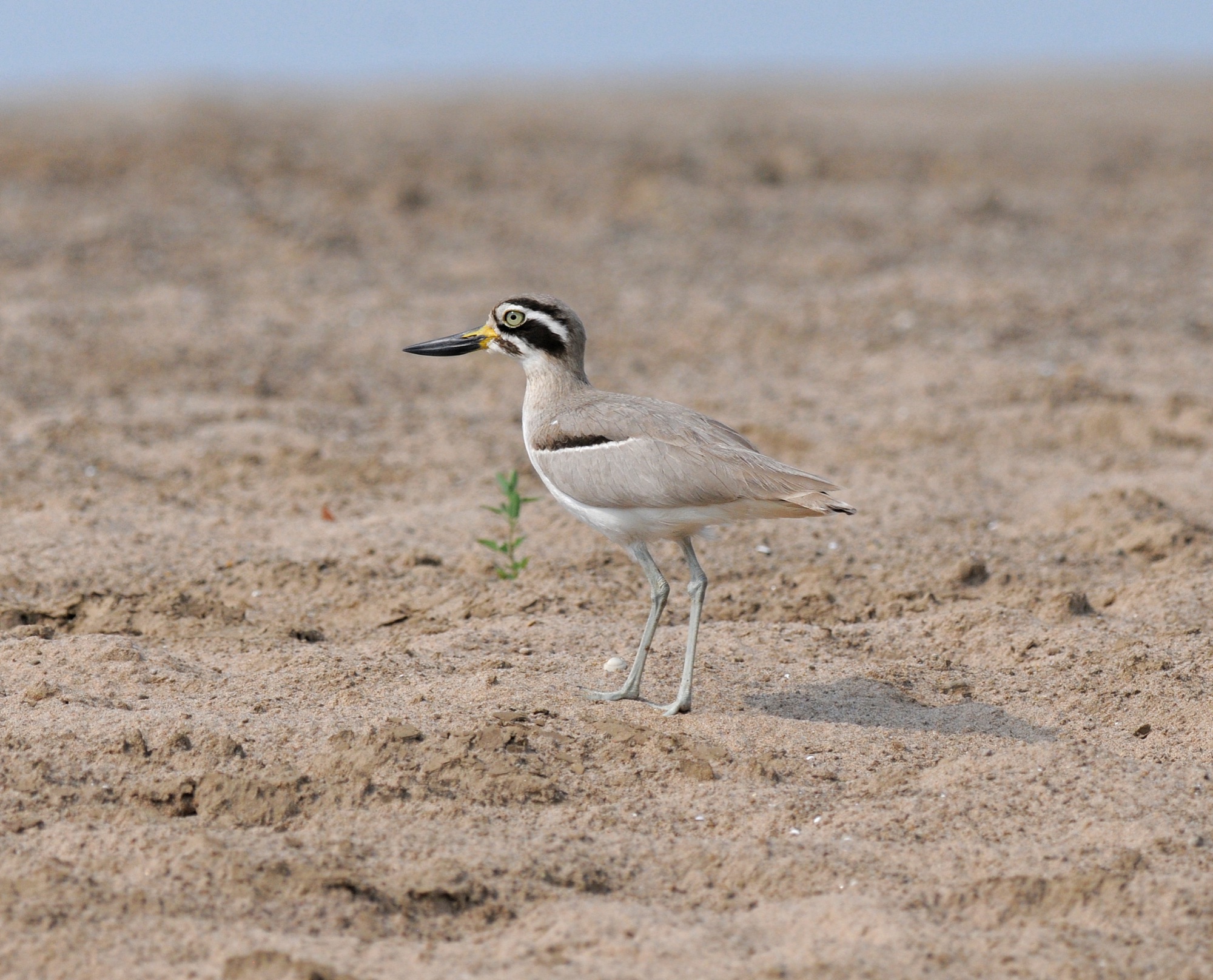 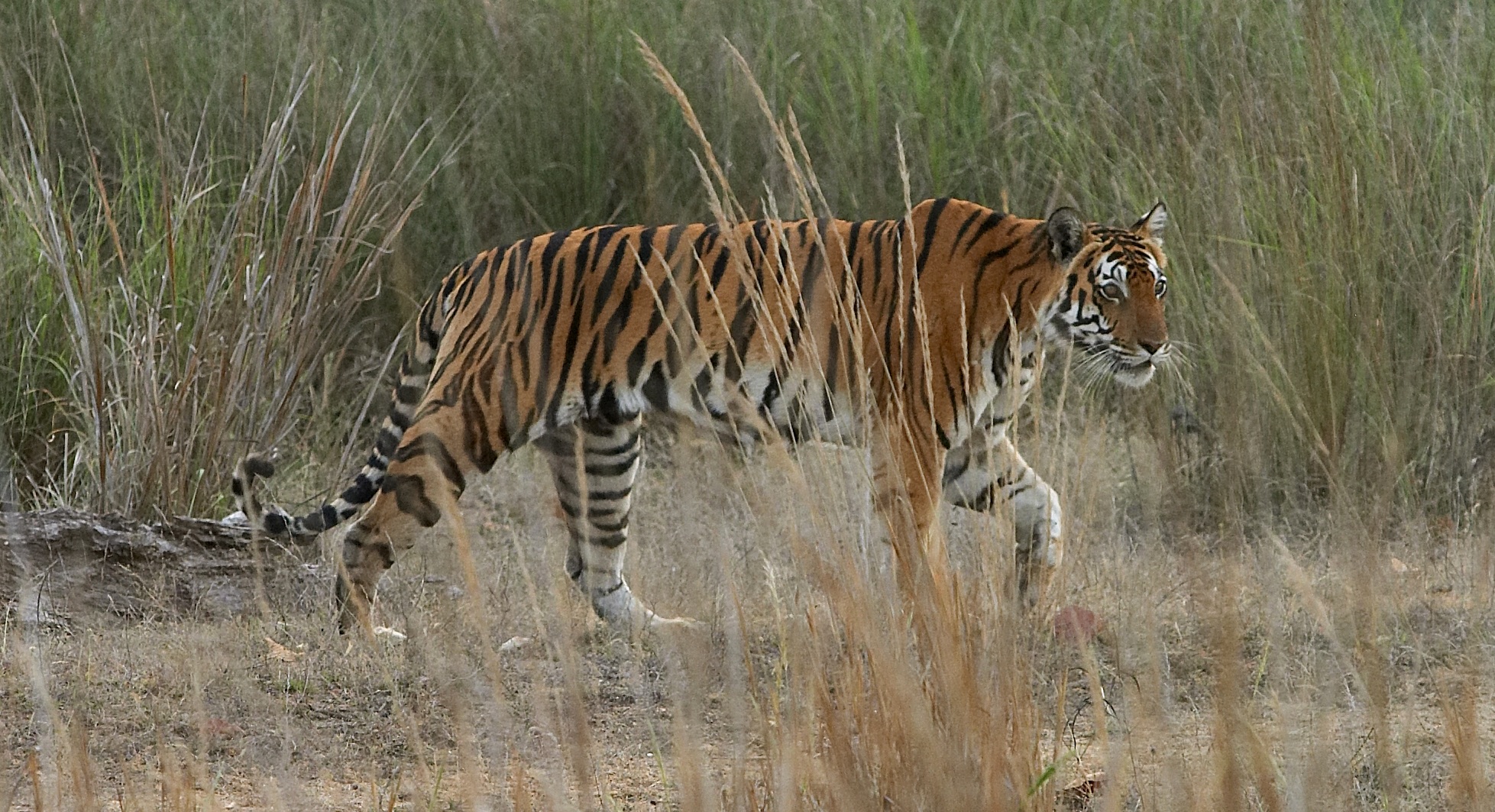 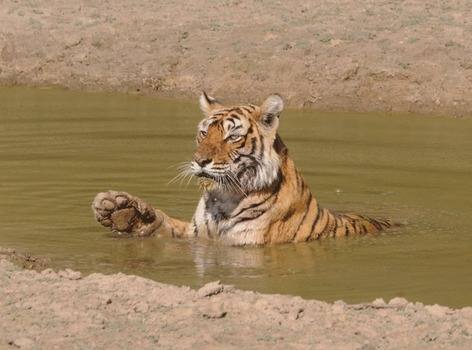 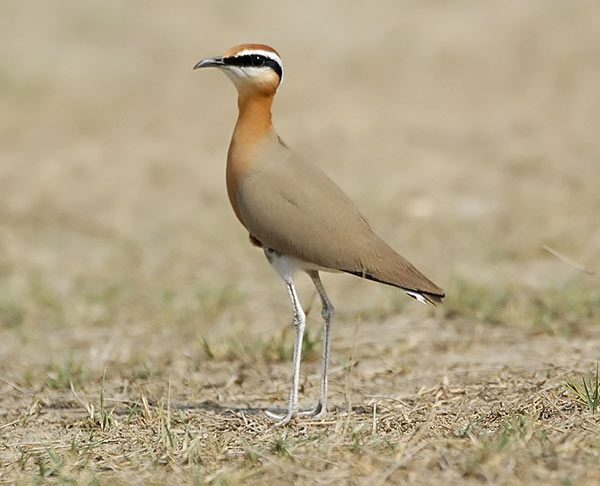 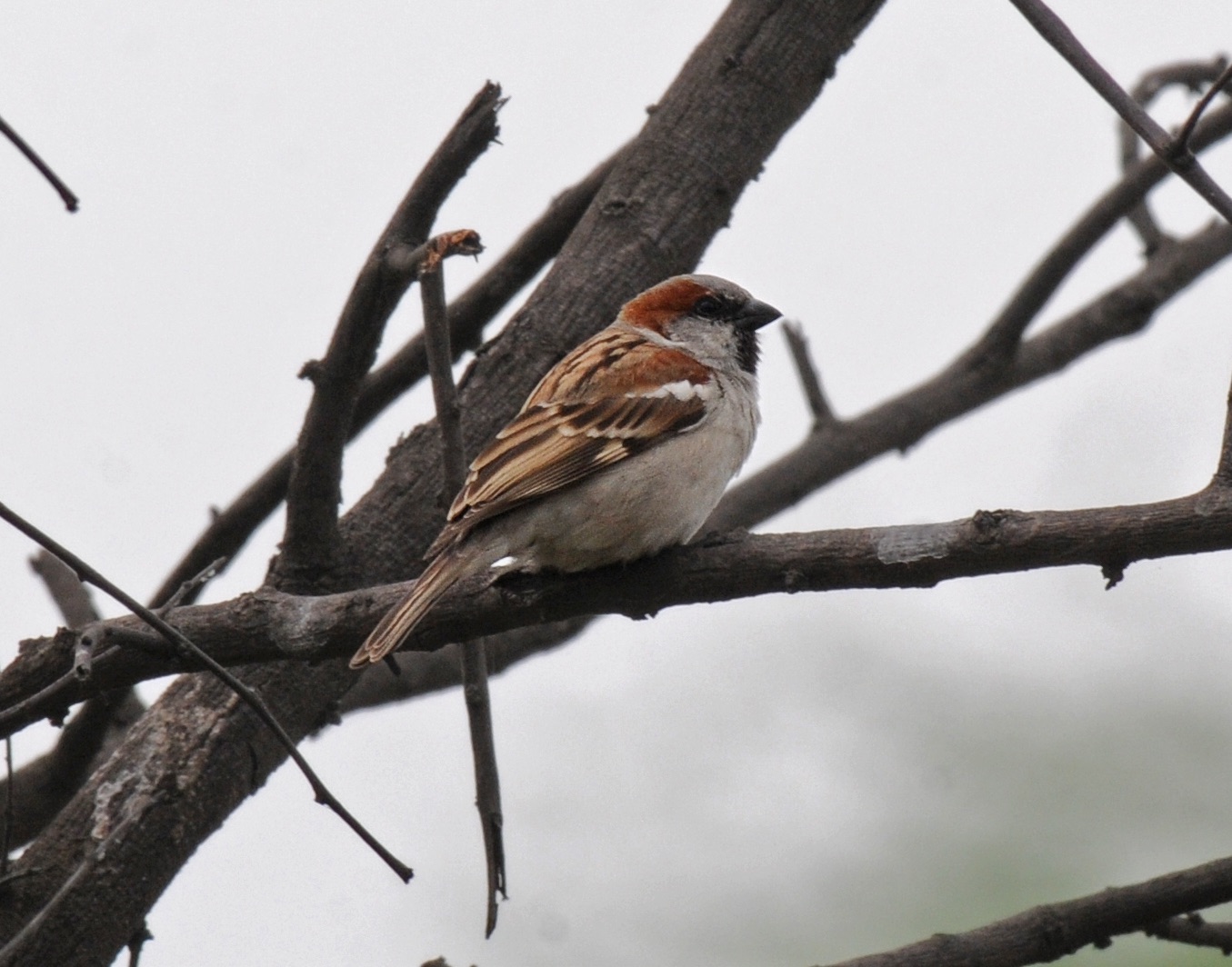 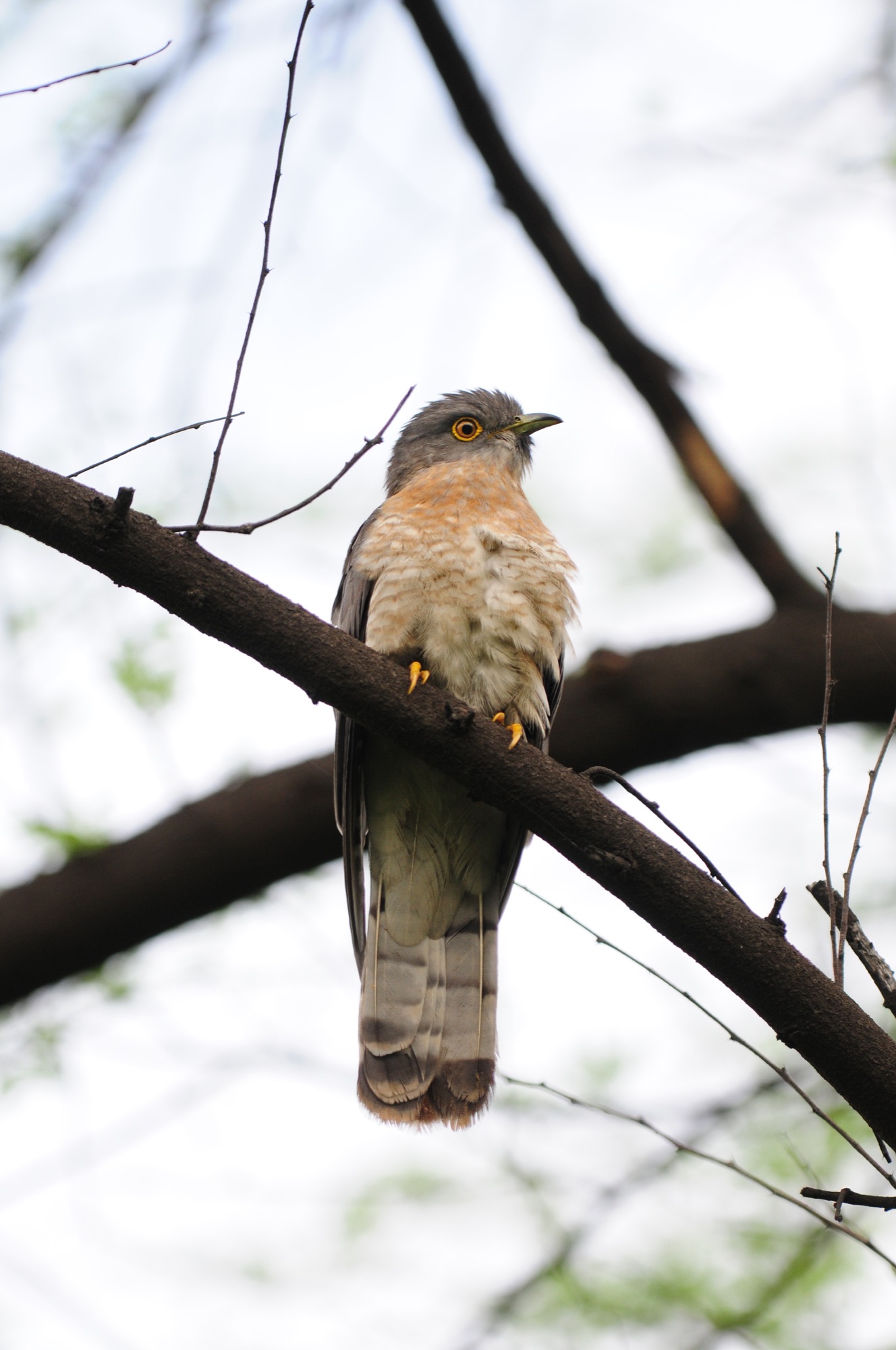 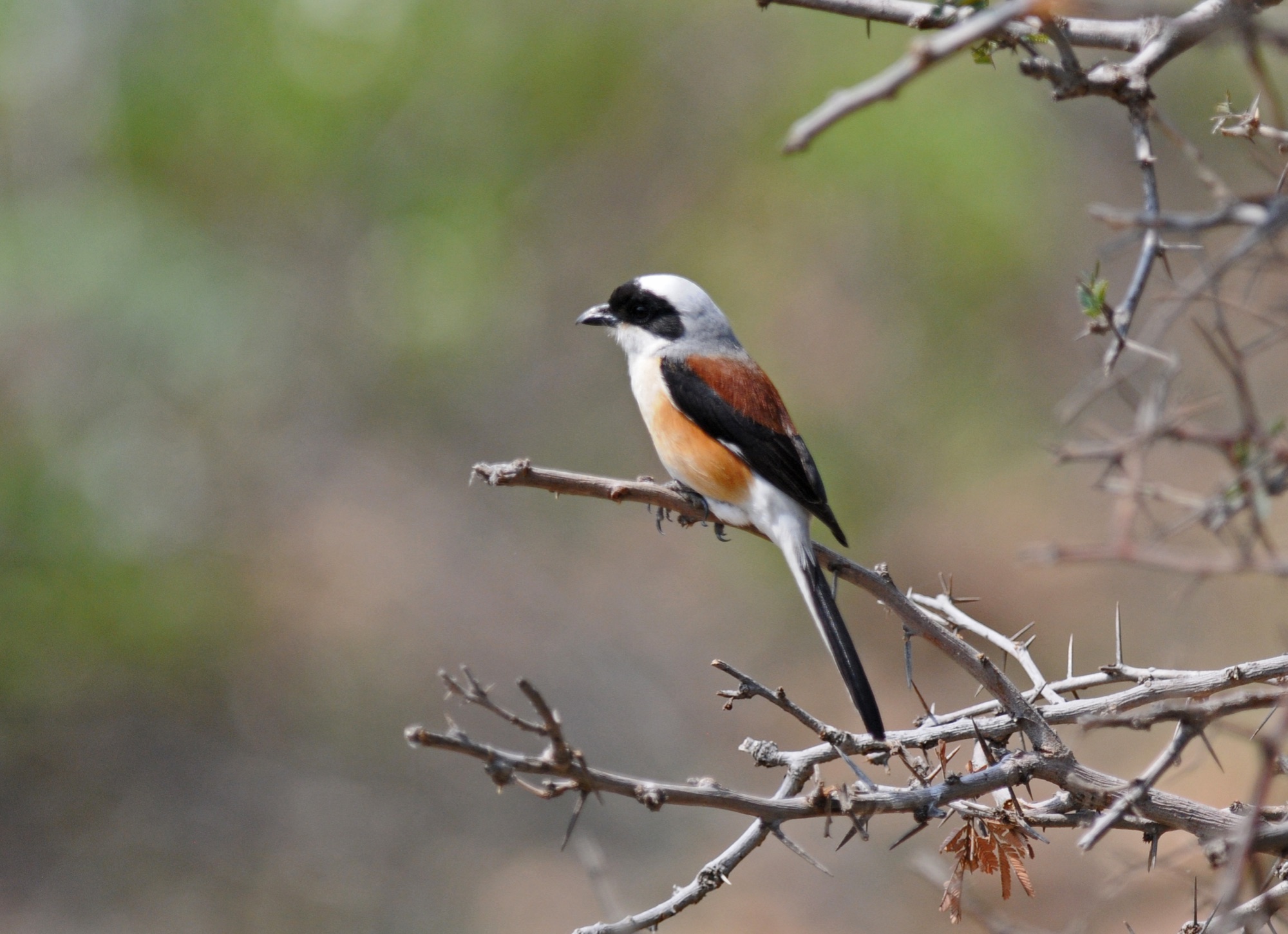