Day 1   Arrival in Quito, Ecuador  - 22nd Septembr
Arriving to Mariscal Sucre Intl, Quito and transfer to our hotel in Quito. The city is located at (2800 meters) and is the second highest capital in South America after La Paz in Bolivia. Quito is a modern city with a lot of cultural attractions and colonial architecture and if there is any time we can take a look around the immediate vicinity and soak up the ambience! Night in Quito.

Day 2    Yanacocha
We will have an early start and visit the elfin forest-cloaked slopes of Pichincha Volcano in the temperate zone of the western Andes and in particular the beautiful Jocotoco Foundation Reserve of Yanacocha (3500m). This is a great place to kickstart our Ecuadorian adventure as it holds an amazing variety of cloud forest and upper montane forest species and where the main prizes of the rather rare Black-breasted Puffleg, superb Giant Conebill, and sometimes even Imperial Snipe can be found. An initial walk in this forest may well give us a chance to observe our first feeding flocks that hold such delights as Scarlet-bellied, Hooded and Black-chested Mountain-Tanagers, mixed in with lots of other potential species such as Spectacled Redstart, Supercilaried Hemispingus, Golden-crowned Tanager, Blue- backed Conebill and Crowned Chat-Tyrant. Other potential goodies include Andean Guan, Andean Pygmy Owl, Bar-bellied Woodpecker, Barred Fruiteater, White-chinned Thistletail, Azara’s and White-browed Spinetails, Pearled Treerunner, White-throated Tyrannulet, Blackish Tapaculo, Glossy and Masked Flowerpiercers, Brown-bellied Swallow, Great Thrush, Rufous Wren, Rufous-collared Sparrow, and both Rufous-naped and Stripe-headed Brush-Finches.

There are numerous hummingbird feeders strategically located along the trail which regularly attract Great Sapphirewing, Rainbow-bearded and the scarce Purple-Mantled Thornbills, Buff-winged Starfrontlet, Shining Sunbeam, Tyrian Metaltail, Mountain Velvetbreast, Sapphire-vented and Golden-breasted Pufflegs, and the stunning Sword-billed Hummingbird. However, our focus will be on finding Tawny and Rufous Antpittas and chances are really good since both of them inhabit this type of vegetation. There is also an outside chance of Undulated Antpitta, although we would need a huge slice of luck to connect with this erratic species.

After this walk we will continue driving towards the Tandayapa Valley, driving down the famous Old Nono-Mindo Road in the afternoon. In this area other birds can be seen such as Torrent Duck, Andean Lapwing, White-capped dipper, White-tailed Tyrannulet, Slaty-backed Chat-Tyrant, Turquoise Jay, Spectacled Whitestart, Blue-winged Mountain-Tanager, Beryl-spangled Tanager and Capped Conebill amongst many others. Possibilities this afternoon are seemingly limitless and the list of potential sightings is extraordinarily long! At the end of the day we will arrive at our secluded lodge to have dinner and do our firt checklist. Night in Tandayapa Valley.

Day 3   Refugio Paz de Las Aves
Very early start at 04:30 and then drive to reach the private cloud forest reserve of Refugio Paz de las Aves also known as El Refugio de Las Antpittas, where Angel Paz has developed a unique relationship with three antpitta species: Giant, Yellow-breasted and Moustached. And we hope to get crippling views of all three species. In the past both Chestnut-crowned and Ochre-breasted Antpittas have also put in an appearance as well. There could be some other species enticed to the feeding station and if we are lucky we could also see Dark-backed Wood Quail, Rufous-breasted Antthrush and Nariño or Ocellated Tapaculos as well.

There are also good chances to see Andean Cock-of-the-Rock at a hide that has been set up appropriately to admire these creatures during their lek activities. After this, a walk along the trails is a must to enjoy the unique richness of this forest. Other possibilities in the forest include Sickle-winged Guan, Crimson-rumped Toucanet, Golden-headed Quetzal, Toucan Barbet, Scaled and Orange-breasted Fruiteaters, Golden-winged Manakin, Olivacious Piha, Black-chinned Mountain-Tanager, Beryl-spangled and Golden Tanagers and various hummers around the property.

Our afternoon birding session will be taken at Sacha Tamia lodge, where we will see a variety of different hummingbirds coming to the feeders such as Velvet-purple Coronet, Violet-tailed Sylph, Brown and Collared Incas among the 17 other hummer species recorded here. Whilst nearby Band-backed and Whiskered Wrens, Pacific Antwren and White-backed Fire-eye are also possible. On our way back to Quito we will stop at Calacali and try looking for some dry forest birds such as Giant Hummingbird, White-tailed Shryke-Tyrant and Tufted Tit-Tyrant. Night in Quito.

Day 4    Quito - Loja – Podocarpus National Park
We will take a very early flight to Loja and immediately start birding around the area looking for Fasciated Wren, Saffron Finch, Elegant Crescentchest and Tumbes Sparrow. As we are on the east slope of the Andes the habitat will be different to what we have seen over the past few days as the moss-encrusted trees are covered with bromeliads and orchids. Then we will continue to Loja, which is the gateway to explore the upper mountain forest of the inter-Andean slopes at Cajanuma, set amidst the magnificent Podocarpus National Park. Some of the birds likely to be seen here are Bearded Guan, Andean Pygmy-Owl, White-capped Parrot, Golden-plumed Parakeet, Grey-breasted Mountain-Toucan, Crimson-mantled and Powerful Woodpeckers, Barred Fruiteater, Pearled Treerunner, White-browed Spinetail, Black-capped and White-fronted Tyrannulets, Rufous-headed Pygmy-Tyrant, Black-throated Tody-Tyrant, Rufous-breasted Chat-Tyrant, Smoky Bush-Tyrant, Masked and Bluish Flowerpiercers, Glossy-black Thrush, Rufous Wren, Black-crested Warbler, Spectacled Whitestart, Blue-backed Conebill, Black-capped Hemispingus, Turquoise Jay, Grey-hooded Bush-Tanager, Lacrimose and Hooded Mountain-Tanagers, Beryl-spangled, Blue-browed and Red-hooded Tanagers, Rufous-naped Brush-Finch, Plushcap, and if we are lucky Masked Saltator or Slaty Finch.

From here we will drive towards Tapichalaca Reserve and on our way we will cross Vilcabamba, a remote town located amidst a dry forest valley where we could see Plumbeous Rail, Pacific Hornero, Plumbeous-backed Thrush and White-tailed Jay. We can try some spotlighting this evening with White-throated Screech-Owl and Andean Potoo both possible. Night at Jocotoco House.

Day 5    Tapichalaca Reserve
This morning we will prepare our camaras and binoculars to admire how the park ranger, Franco, has developed a relationship with a couple of Jocotoco Antpittas. They come to the trail looking for the worms that he has collected and cleaned for them. This species was only discovered as recently as 1997 and the Jocotoco Foundation own this 2000 hectare reserve. Great views of Jocotoco Antpittas (an endemic and restricted-range antpitta species) and Chestnut-naped Antpittas are almost guaranteed since they have become familiar with this procedure, Rufous Antpitta is relatively common here, but Undulated Antpitta is an infrequent visitor and Slate-crowned Antpitta is even trickier.

Day 7    Cuxibamba Valley – Loja
We will drive to Cuenca this morning, exploring the hills that surround the Cuxibamba Valley near Loja. Here we will try to collect all those birds that we have not seen in previous days. If we have some up-to-date news we may well attempt to find the very tricky Crescent-faced Antpitta at a new site. We will also look for some new birds for the trip such as Chestnut-tipped Toucanet, Golden-olive Woodpecker, La Fresnaye's Piculet, Rainbow Starfrontlet, Ecuadorian Graytail, Red-faced Parrot, and have further chances of Chestnut-crowned Antpitta, Ash-browed Spinetail, Slaty-capped Flycatcher, Ecuadorian Tyrannulet, Yellow-breasted Antwren, Three-banded Warbler, Black Flowerpiercer, White-crowned Tapaculo, Yellow-whiskered Bush-Tanager, Buff-chested and Masked Mountain-Tanagers amongst many others. In the afternoon we will drive to Catamayo airport to catch or flight back to Quito and upon arrival we will be transferred to our hotel. Night in Quito.

Day 8    Antisana
Early departure to the tundra-like habitat around the snow-capped Antisana volcano, a private reserve that protects paramo habitat up to around 4000m. If we still need Rufous or Tawny Antpittas then we will concentrate our efforts on finding these species on the drive up from Quito first. This unique place harbours populations of the endangered Black-faced (Andean) Ibis and it is also a great area to look for Andean Condor - Ecuador’s national bird. Other species here include Black- chested Buzzard-Eagle, Carunculated Caracara, Aplomado Falcon, Black-winged Ground-Dove, Shining Sunbeam, Black-tailed Trainbearer, the endemic Ecuadorian Hillstar, Streak-backed and Many-striped Canastero, Andean Tit-Spinetail, Stout-billed and Chestnut-winged Cinclodes, Paramo Ground-Tyrant, Black-billed Shrike-Tyrant, Paramo Pipit and Plumbeous Sierra-Finch. At a scenic lake we can see Silvery Grebe, Andean Coot, Andean Duck, Andean Lapwing and Andean Gull. At the end of the day we will return to our hotel in Quito for our last dinner together. Night in Quito.

Day 9    End of Tour  - 30thSeptember
Transfers to Quito airport and end of the tour. 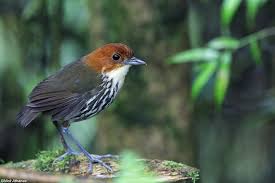 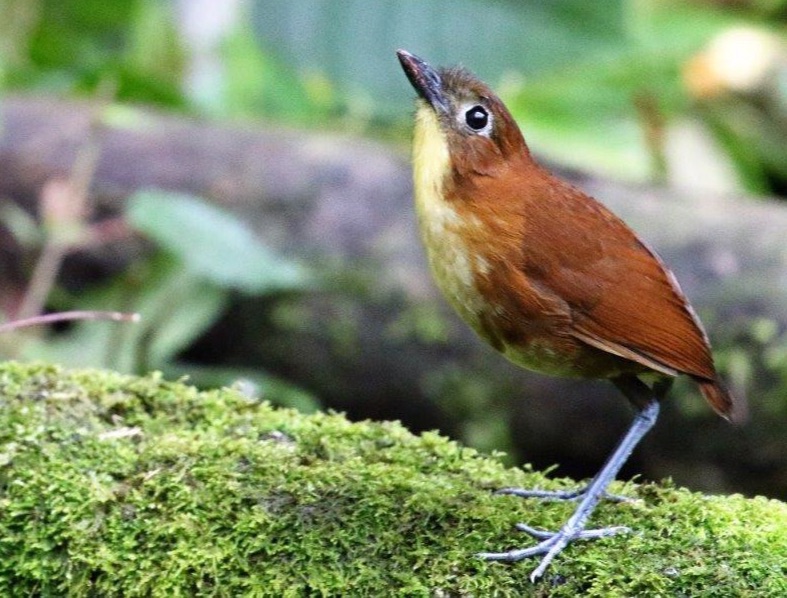 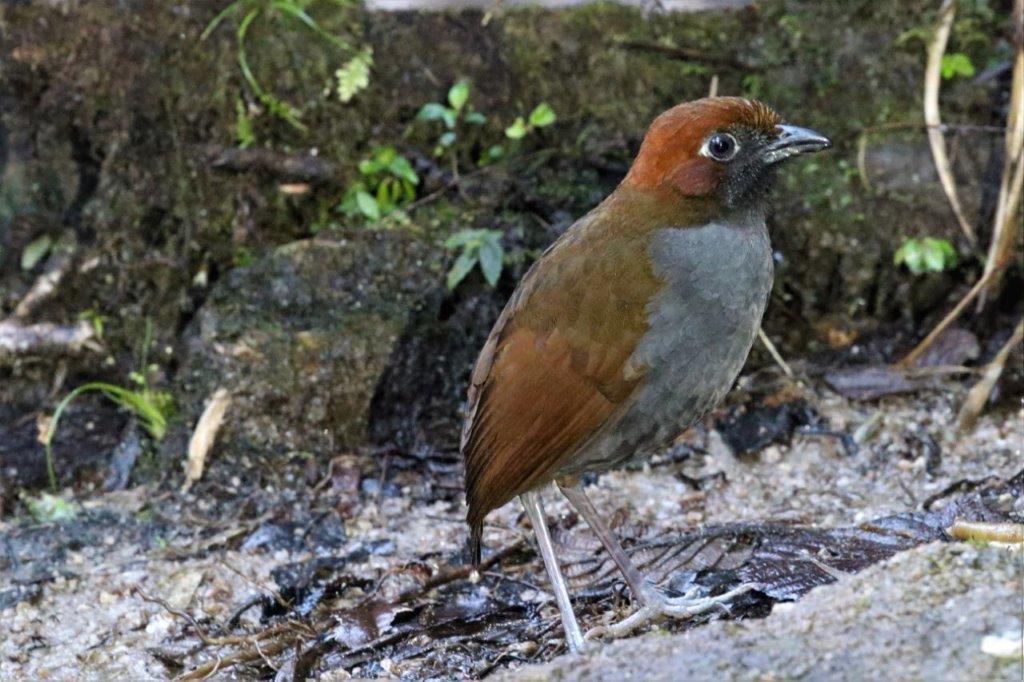 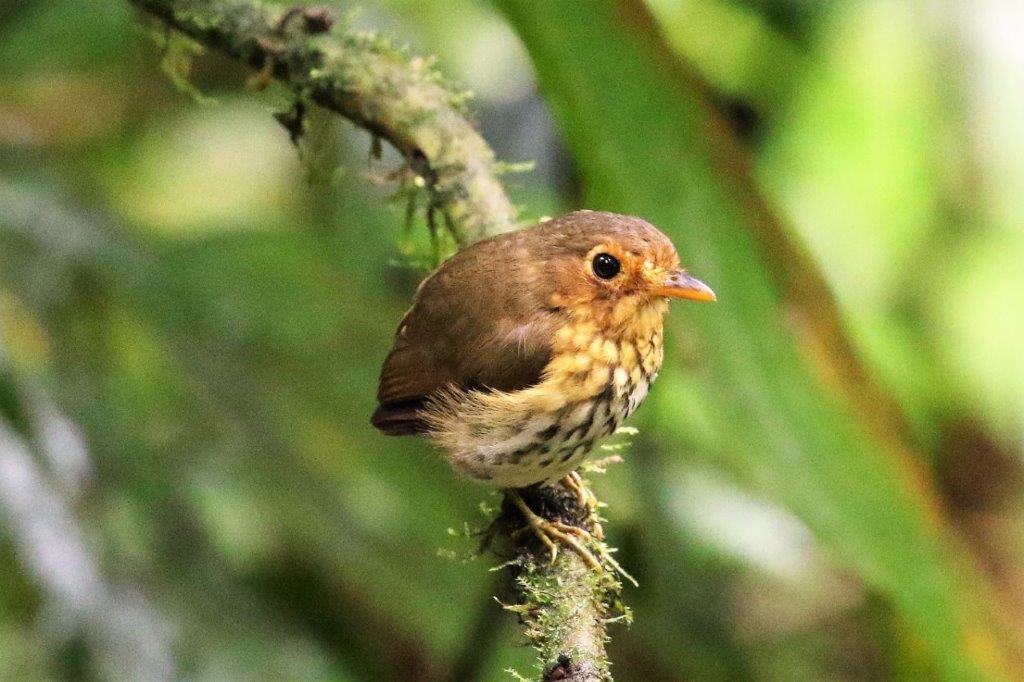 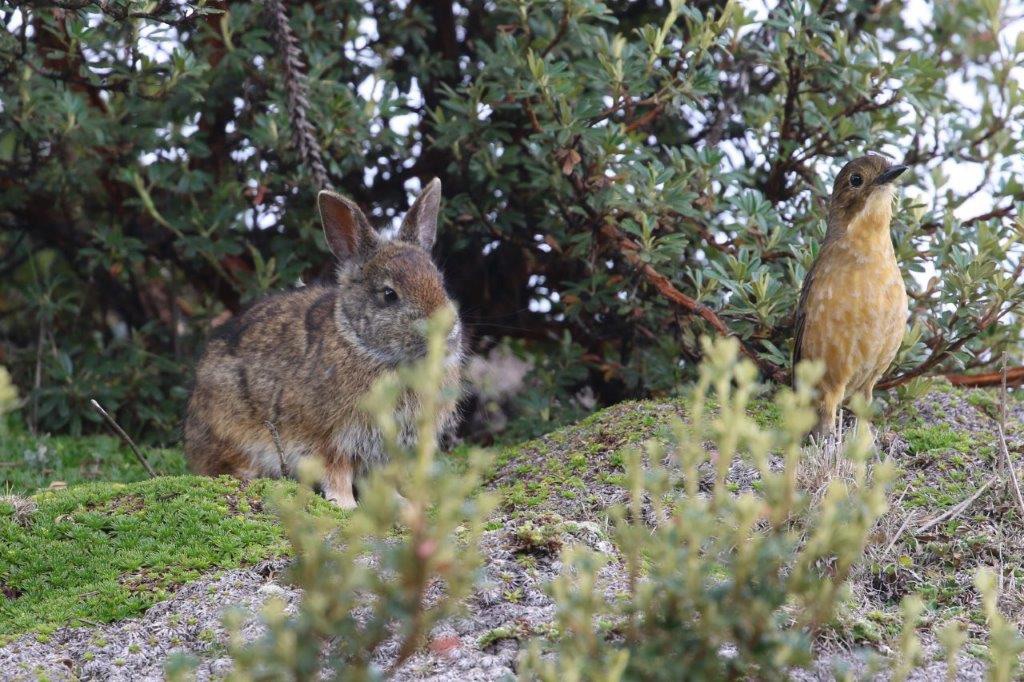 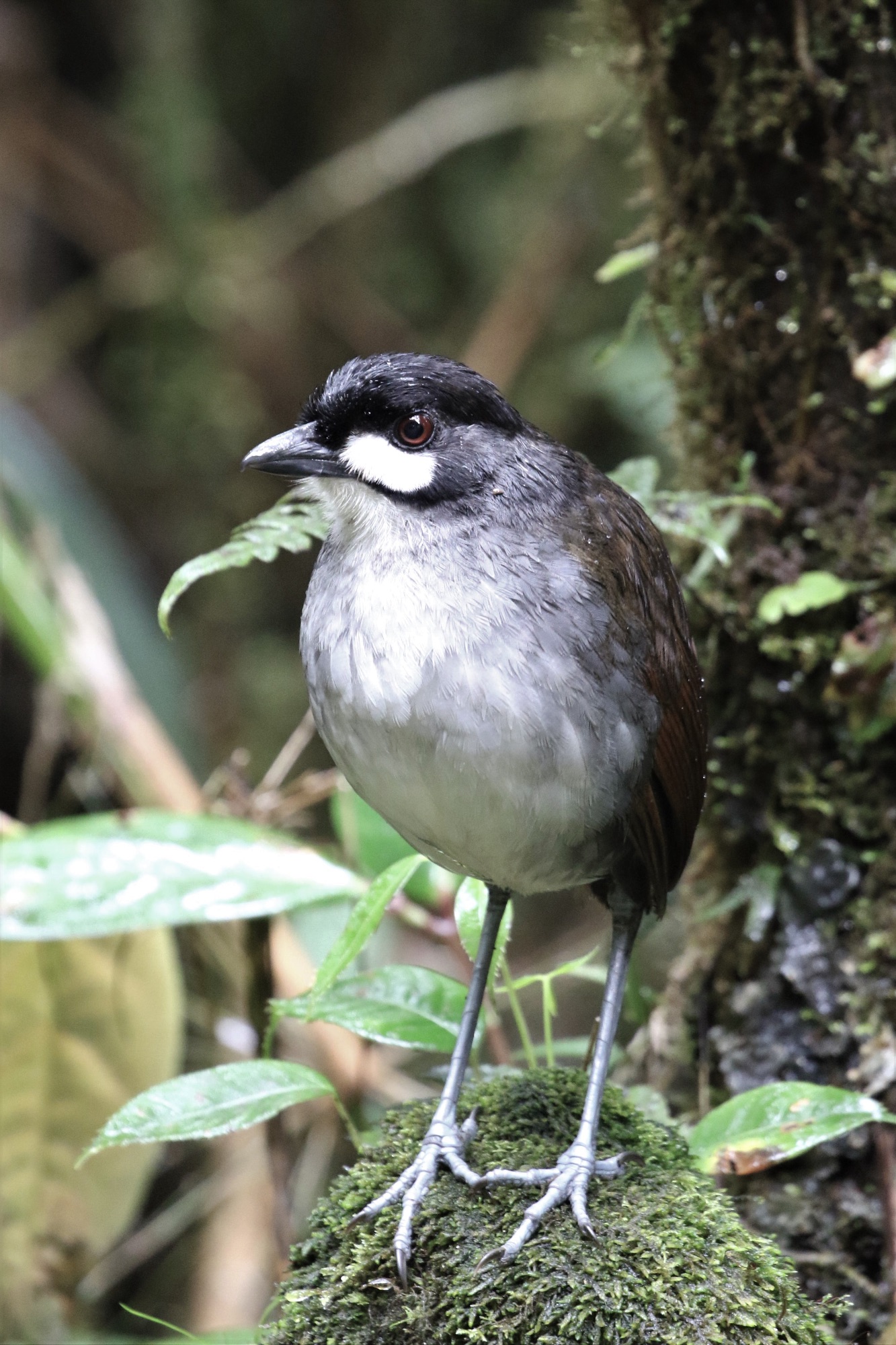