Day 1    Arrival in Shanghai   - 1st December
Upon arrival at Shanghai Pudong Airport this morning, we will drive to Jianggang where we will stay the night. If time permits we will spend some time birding along the coast before reaching the hotel.

Day 2   Jianggang - Dongtai - Yancheng
We will head to a coastal site that can be very good for the Critically Endangered Spoon-billed Sandpiper early this morning. This coastal area of the Yellow Sea is one of the best locations to see this much-wanted bird, along with other great birds such as Black-faced Spoonbill, Chinese Egret and Saunders's Gull. This could be a great start to the tour and amongst other species we could see this afternoon include Dalmatian Pelican, Red-necked Stint, and both Vega and Heuglin's Gulls. A series of lagoons and marshes on the landward side hold flocks of ducks and there are usually plenty of Falcated Ducks here, mingled with large numbers of more familiar waterfowl as well as Eastern Spot-billed Duck and Greater Scaup.

We will keep our eyes open for any Baikal Teal present, before driving further along the coastal road. This area around Dongtai is also good for passerines and possibilities include flocks of Chinese Penduline-Tits, Pale and Dusky Thrushes usually give good views and are relatively common, Pallas's Leaf Warblers add a splash of colour, whilst Oriental Skylarks and Bramblings can fly over in quite a spectacle of visible migration. One of the features of winter birding in China is the impressive numbers of buntings and out last tour saw 12 species! In this area we could see Chestnut-eared, Rustic, and both Japanese Reed and Pallas's Reed Buntings. Night at Yangcheng.

Day 3  Yancheng Nature Reserve
Yancheng Nature Reserve in eastern Jiangsu is located beside the Yellow Sea. It  has a huge mosaic of habitats including saltpans, lagoons, coastal grassland and reed beds and holds one of the largest winter concentrations of waterbirds in Asia. It is famous as the wintering home of half of the world’s population of Red-crowned Crane, which only numbers around 2000 individuals and we will spend plenty of time observing these stunning birds. This reserve usually holds a few Hooded Cranes, whilst Common Cranes are also fairly prominent and sometimes even Sandhill Cranes that have migrated the ‘wrong way’ from their Siberian breeding grounds are present. And what a place this is as amongst an impressive array of other species we hope to see some truly desirable and much-wanted birds including Baikal Teal and Falcated Duck. Amongst a superb selection of Eastern Palearctic gulls residing here, the striking Saunders’s Gull should not be too hard to find, and with a little luck the rare Relict Gull is sometimes present. Other highlights from our action-packed couple of days birding here could include the endemic Reed Parrotbill, which is like a monster Bearded Reedling, Vinous-throated Parrotbill, Chinese Penduline-Tit, Chinese Grey Shrike, both Japanese and Pallas’s Reed Buntings, and our last tour found Chestnut and Yellow-breasted Buntings here along with huge flocks of Little Buntings.

Our eyes will also be drawn to the huge numbers of wintering wildfowl and there will be large rafts of many familiar and common species, but of more interest are Tundra Bean Goose, Eastern Spot-billed Duck and Smew amongst others. In fact the spectacle of thousands of birds flying over, often at really close quarters, and the cacophony of sound is truly thrilling. Other species of interest usually present include Great Bittern, Eastern Marsh and Hen Harriers, Eastern Buzzard, Mongolian, Heuglin’s, Black-tailed, Vega and Kamchatka Gulls, Caspian Tern, Oriental Skylark, Buff-bellied and Water Pipits, Northern Red-flanked Bluetail, Daurian Redstart, Chinese Blackbird, White-cheeked Starling, Azure-winged Magpie, Lapland Longspur and numerous Rustic and Black-faced Buntings. Nights at Yancheng.

Day 4  Yancheng - Nanhui
We can visit a nearby forest park this morning, which can hold some interesting and very desirable wintering species such as Long Eared Owl, Siberian Rubythroat, White's, Naumann's, Dusky and Pale Thrushes, Pallas's Warbler, Mugimaki Flycatcher, Hawfinch, and the stunning Northern Red-flanked Bluetail. Our last tour also found Silver-throated Bushtit and there's always a chance of Japanese Waxwing here as well. Nearby fields can be worth checking for Rustic, Chestnut-eared, Little and Pallas's Reed Buntings if we still need them.

Moving back to the coast, we will our search a variety of other coastal sites where we hope to see the endangered Black-faced Spoonbill, as well as Eastern Spot-billed Duck, Eastern Marsh Harrier, Greater and Mongolian Sandplovers, the taxonomically challenging White-faced Plover, Red-necked Stint, Terek Sandpiper and many other shorebirds, Black-tailed, Vega, Heuglin’s, and the endangered Saunders’s Gull, Richard’s, Red-throated and Water Pipits, Japanese White-eye, Yellow-browed Warbler and Chinese Penduline Tit amongst others.

Once we are finished here we will return to Shanghai along the modern expressways and a new bridge over the mighty Yangtze River and spend the night in a comfortable hotel near Shanghai.

DAY 5    Nanhui - Shanghai - Dongzhai NNR
Just 45 minutes away from our hotel is the coastal area of Nanhui, which has a variety of habitats and can hold some good wintering species, as well as having a good track record of some local rarities. Several small areas with trees hold a variety of warblers, thrushes and buntings, whilst along the coast there's always a good variety of wildfowl and a decent chance of seeing Bakal Teal, Tundra Swan and sometimes Swan Goose. The vast, wide-open fields and marshes attract Brown Crake, Brown-cheeked Rail, Oriental Pratincole, Eastern Marsh Harrier, Black-winged Kite, and further chances of Eye-browed Thrush, possibly Grey-backed Thrush and Pallas's Reed Bunting.

Day 6   Dongzhai NNR
Early this morning we will visit a feeding station where we hope to observe the beautiful Reeves's Pheasant and should hopefully have really good photographic opportunities. Other birds to be on the lookout for include Collared Crow, the reintroduced Crested Ibis, Meadow Bunting, Yellow-bellied Tit,  and Silver-throated Bushtit amongst others.

Day 7    Dongzhai - Poyang Lake
We can spend much of this morning looking for any species we still need before setting out on the drive to Poyang Lake.

Days 8 - 9   Poyang Lake
We have 2 full days to explore the world-renowned Poyang Hu situated to the south of the great Yangtze River. Poyang Hu is the largest freshwater lake in China, covering about 3000 square kilometres and is a mosaic of shallow lakes that prove attractive to literally hundreds of thousands of waterbirds. It is one of the most important wetlands in the world and each winter holds an estimated 1500 - 2000 Siberian Cranes (95% of the world population), as well 2000+ of the equally majestic White-naped Crane, along with smaller numbers of the scarce Hooded Crane as well. The sheer numbers of waterbirds and wildfowl here are unbelievable including estimated wintering populations of 2000+ Tundra Swans, 10,000 Swan Geese, 5000+ Greater White-fronted Geese and smaller numbers of Swan, Greylag, Lesser White-fronted and Taiga Bean Geese. And there is also a healthy population of Oriental Stork here as well. Add to this numerous commoner wildfowl and good chances of the much-wanted Baer’s Pochard, Baikal Teal and Falcated Duck, plus large flocks of Pied Avocets and Spotted Redshanks and you can imagine how exciting it will be to go birding here! To get the best out of this area we will explore this huge wetland by boat and this should enable us to get very good views of these superb birds.

Amongst a fine supporting cast we will be on the lookout for Japanese Quail, Eastern Imperial Eagle, Brown Crake, Pacific Golden Plover, Daurian Redstart, Chinese Blackbird, Chinese Grosbeak, Oriental Skylark, Grey-backed Thrush, Japanese Swamp Warbler, Masked and White-browed Laughingthrushes, Sooty-headed Bulbul, Oriental Greenfinch, Crested Myna, Richard's, Red-throated, Buff-bellied and Water Pipits, White-cheeked, Black-collared and the endemic Red-billed Starling, and both Elegant and Yellow-browed Buntings. We will also make a concerted effort to find the poorly-known Swinhoe’s Rail, although we shall need a great deal of luck! We will spend these nights at Wucheng, which is on an island in the middle of the wetlands and for most of the year can only be reached by boat.

Day 10   Poyang Lake - Nanjishan - Wuyuan
We will have a little time to check out some nearby areas, possibly for the rare and elusive Swinhoe’s Crake at Nanjishan, and we could also find Dusky Warbler or Yellow-throated Bunting here, and have one last look at the cranes. Then we will set off on the drive to Wuyuan, which will take most of the day along the new highways that have recently been built. We should arrive at the picturesque small town of Wuyuan in the early evening in time for another great meal. Night in Wuyuan.

Day 13   Wuyuan - Emei Feng
We will depart early from Wuyuan and drive to Emei Feng in Fujian Province, arriving in the afternoon and a perfect time to look for the shy Elliott's Pheasant that can sometimes be seen feeding at the edge of small fields and forest clearings in the late afternoon. Night at Taining.

Day 14   Emei Feng
An early start will see us slowly driving up into the mountains in search of our main target of Elliot's Pheasant, which are incredibly shy and endemic to south-east China. Although this is currently the best site in the country to find this species, it is still very difficult and moves quietly through the bamboo but emerges onto the tracks to take grit in the early mornings and late evenings. This mountain’s other main prize is Cabot's Tragopan, also endemic to SE China, and resides in the moss-encrusted forest at the top of the mountain. It is also a very difficult species to find and we will have to walk and drive along the upper section of road repeatedly to have any chance of seeing one. The endemic White-necklaced (Rickett’s) Partridge is also found here but we have a better chance of finding this species at Fuzhou Forest Park, but there are also good chances of Chinese Bamboo Partridge, Koklass and Silver Pheasants here. Other species present in winter include Collared Owlet, Grey-headed and Bay Woodpeckers, Sultan and Yellow-cheeked Tits, Spotted Forktail, White-bellied Erpornis, Black and Mountain Bulbuls, Japanese White-eye and White's Thrush. Night at Taining.

Day 15   Emei Feng - Fuzhou Forest Park
We have another chance to look for Elliot's Pheasant at Emei Feng early this morning before driving to Fuzhou where we stay in a nice hotel in the city. Upon arrival we will spend the afternoon in Fuzhou Forest Park situated right at the edge of the city. An excellent network of trails criss-cross the forested hillsides here and give access to excellent lowland forest that is home to some very special birds including Silver Pheasant, White-necklaced (or Rickett’s) Partridge and Spotted Elachura - this latter species has recently been reclassified and now been placed in its own monotypic family. Other species to be found here include Black Eagle, Crested Goshawk, Red-headed Trogon, Great Barbet, Speckled Piculet, Rufous, Pale-headed and Bay Woodpeckers, Slaty-backed Forktail, Chestnut and Mountain Bulbuls, Large Woodshrike, Scarlet Minivet, Asian Stubtail, Grey-headed Parrotbill, Orange-bellied Leafbird, Mugimaki or even a rarer overwintering Blue-and-white Flycatcher, Fork-tailed Sunbird, Slaty-backed Forktail, Grey-sided Scimitar-Babbler, Rufous-capped Babbler, Masked, Lesser Necklaced and Greater-necklaced Laughingthrushes, Chinese Hwamei, Eye-browed, Grey-backed and Siberian Thrushes, Rufous-faced Warbler, Huet’s Fulvetta, Indochinese Yuhina, Fire-breasted Flowerpecker, Olive-backed Pipit, Grey Treepie and Tristram’s Bunting. Night in Fuzhou.

Day 16    Fuzhou Forest Park
We can spend the morning back in Fuzhou Forest Park searching for any species we might still need. The forest here can be very productive in the early morning and as we walk quietly along the trails we will listen for the tell-tale rustling in the leaf litter that could betray the presence of White-necklaced Partridge - the key species here, or possibly we can find one of the rarer passerines that often overwinter here such as the rare Japanese Robin! After lunch we will drive to the airport and fly back to Shanghai Pudong Airport, where we will stay at the airport hotel for the night.

Day 17   Shanghai - UK - End of Tour  - 17th December
Return international flights back to the UK/Europe/USA and the conclusion of a wonderful tour. 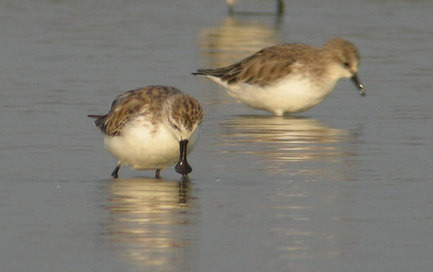 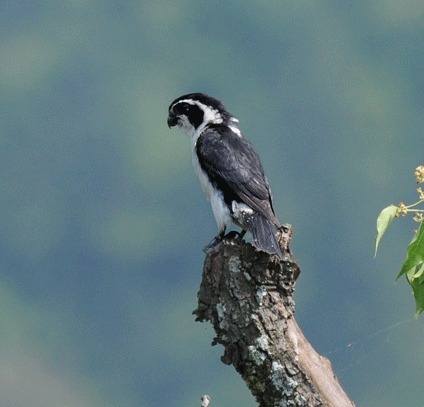 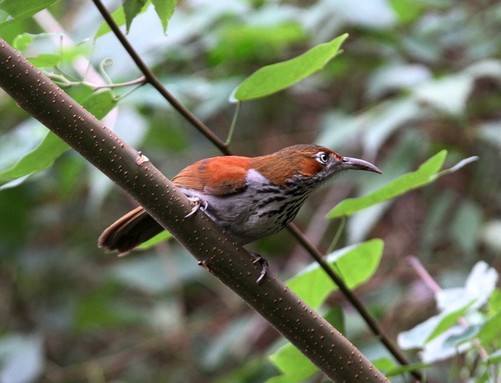 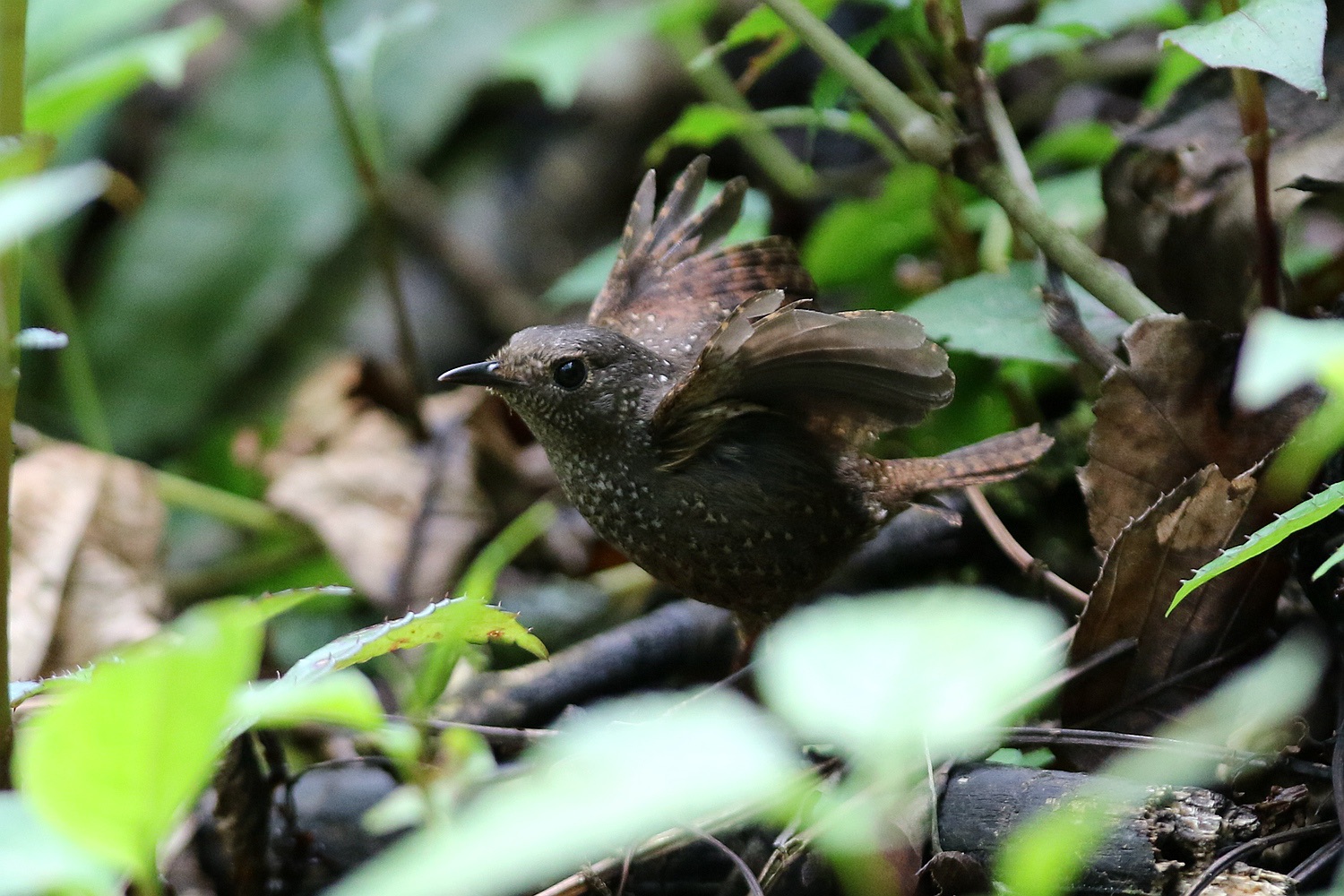 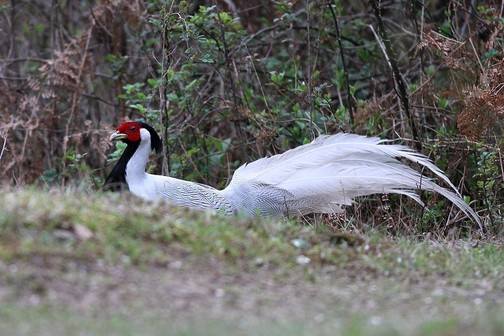 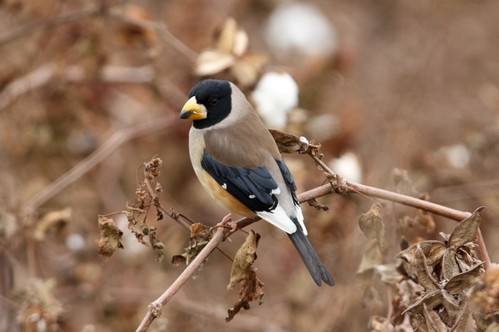 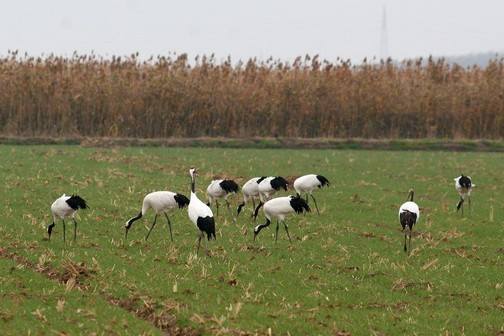 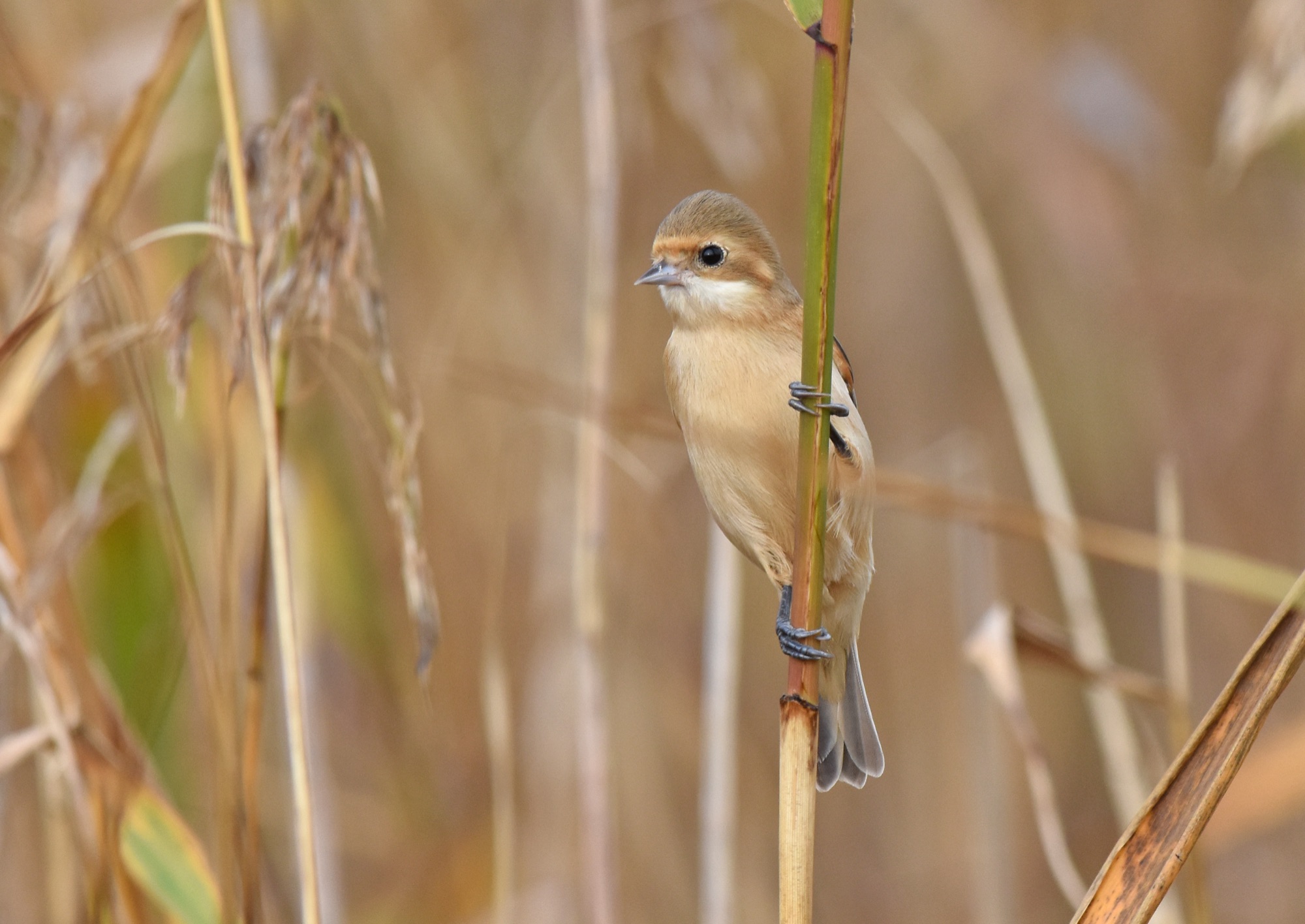 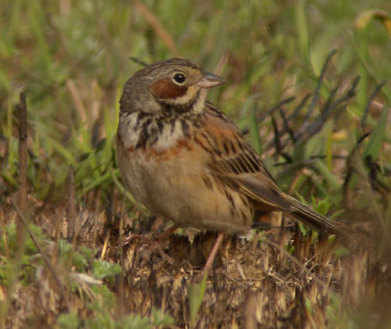 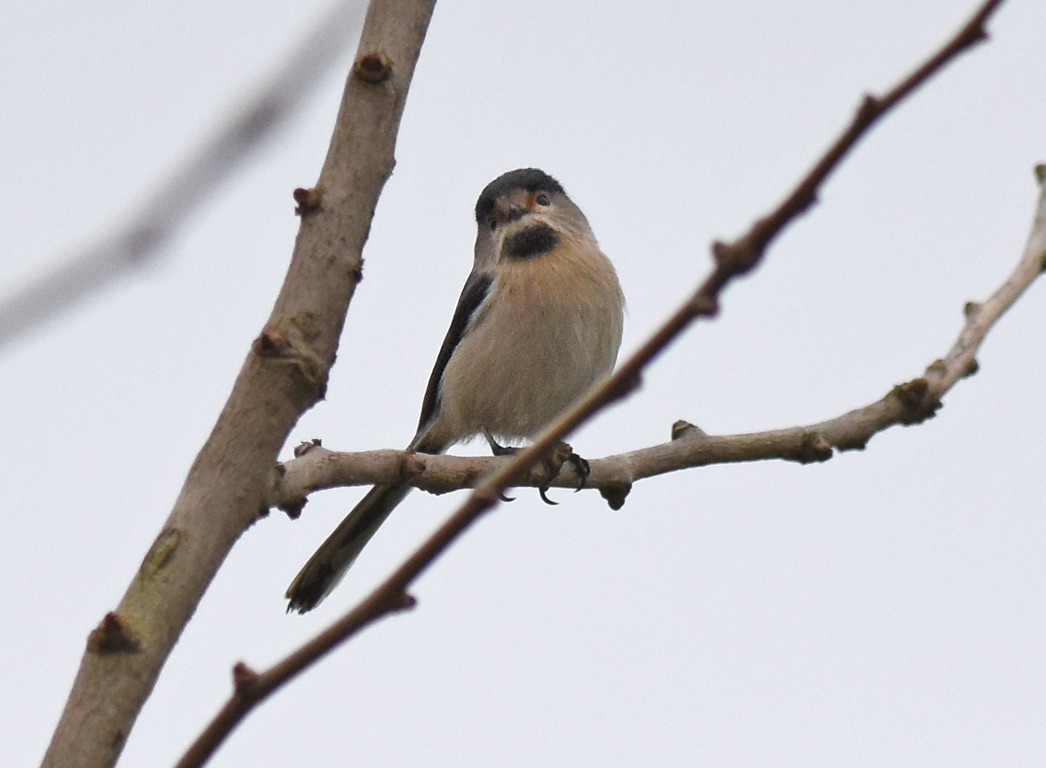 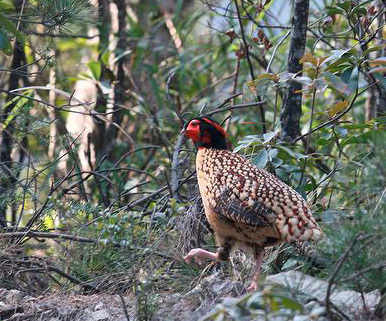 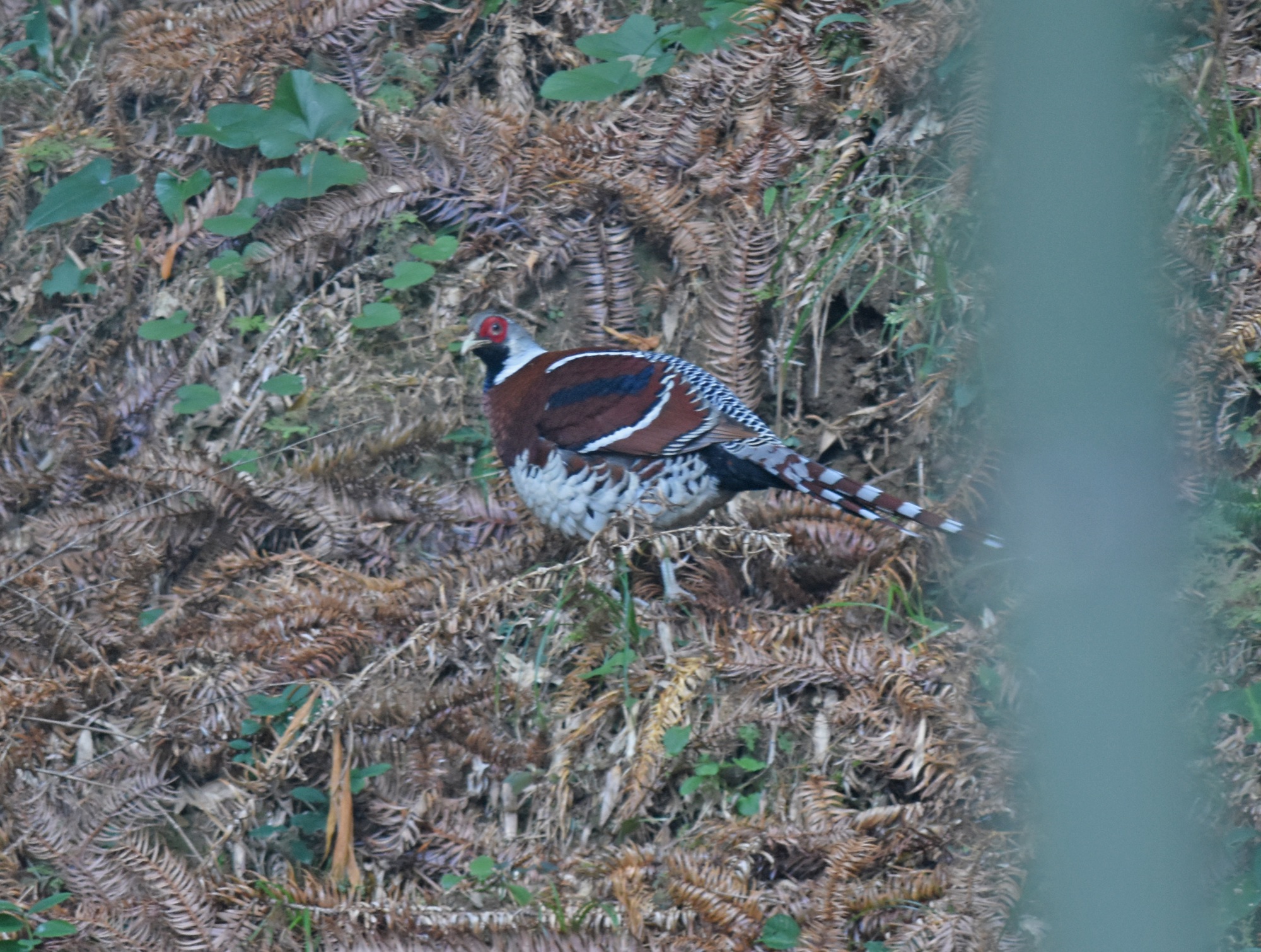