Day 1   Arrival in Manaus  - 5th July 2020
Plan on arriving in Manaus, Brazil today and we will meet this evening for dinner to discuss our adventure for the next few weeks. Night in Manaus.

Day 2    Manaus – Manacapuru
What better way to start our exciting Amazonian adventure than to spend the morning at the 42m high MUSA tower that gives unparalleled views from 3 different platforms staged at varying heights into the canopy. Some of the targets here include Guianan Puffbird, Paradise, Caica Parrot, Glossy-backed Becard, Guianan Toucanet, Guianan Woodcreeper, Black-spotted Barbet, Red-billed Pied Tanager, Black-faced Dacnis and Spotted Tanager amongst others.

In the afternoon we will drive around 20kms and visit Ramal do Pau Rosa, which is a good area to look for terre firme species such as Red-fan Parrot, Black-throated Antshrike, Northern Slaty-Antshrike, Black-throated and Dusky Antbirds and Blue-backed Tanager. And this area in general is really good for a few species that are much harder on the rest of our route such as Gilded Barbet, Brown-banded Puffbird, Ivory-billed Aracari, Scale-breasted Woodpecker, Black-necked Red Cotinga, Yellow-browed and White-cheeked Antbird and Blue-crowned Manakin amongst others. Our great lodge is in an excellent location and there are bird feeders in the grounds attracting a variety of really cool birds and the photo opportunities are excellent. Night in Manacapuro.

Days 3 - 4   Manacapuru – Novo Airão – Anavilhanas National Park
As part of our exploration of the fabulous Manaus Amazonian region we will cross to the right margin of the Rio Negro river towards Novo Airão, which offers a completely different suite of species. We will begin our morning birding in Balneário Cirandeira, where there is an easy access trail into the forest and this can be a great area that usually harbours some fruiting trees at this time of the year attracting a variety of cotingas and tanagers.  Other species present along this trail include Gilded Barbet, Brown-winged Schiffornis, Yellow-browed and Common Scale-backed Antbird and sometimes Blue-crowned Manakin.

We will spend the afternoon closer to Novo Airão and the terra firme forest and islands of Anavilhanas National Park and what is known as the igapó specialties. We may well spend all or part of the afternoon birding from a boat (just 10 minutes from the hotel) to reach more inaccessible islands and this will be a feature of our time here over the next day or so. Anazilhanas NP has one of the largest fluvial archipelagos in the world and has more than 340 islands within its 350,000 hectares and the wider archipelago surrounding the Negro River covers an area of 100,000 hectares, dominated by Igapó, a forest that floods seasonally by black water that is relatively low in nutrients. This fantastic site is home to a seemingly endless list of species including Grey-winged Trumpeter, Marail Guan, Agami Heron, Crested Eagle, White-winged Potoo, Red-fan, Black-headed and Festive Parrots, Guianan and Tawny- tufted Toucanet, Bronzy Jacamar, Fiery-tailed Awlbill, Varzea Piculet, Pompadour Cotinga, White-chinned Swift, Guianan Puffbird, Blackish-grey Antshrike, White-cheeked, Ash-breasted, Ferruginous-backed and White-plumed Antbirds, Leaden, Sclater’s, Cherrie's and Klage's Antwrens, Glossy-backed Becard, Guianan (Rio Negro) Gnatcatcher, Lesser Hornero, Red-billed and Ocellated Woodcreepers, Curve-billed Scythebill, Parker’s, Scaled Spinetail, Zimmer’s and Long-billed Woodcreepers, Varzea Schiffornis, Wing-banded Wren, Olive-green and Guianan Tyrannulets, Chestnut-belted Gnateater, Saffron-crested and Tiny Tyrant-Manakins, and Black, Yellow-crested and Wire-tailed Manakins, Golden-sided Euphonia, Blue-backed and Dotted Tanagers and White-naped Seedeater. Nights in Novo Airão.

Day 5   Novo Airão - Manaus
We can spend the whole morning exploring some different trails for new species before heading back to Manaus. Night in Manaus.

We will have chances for many canopy birds including birds that we might have missed in the MUSA Tower, such as the beautiful Crimson Fruitcrow, as well as Black-faced and White Hawks, Lined Forest Falcon, Black-bellied Cuckoo, Red-lored Parrot, Green Aracari, Guianan Trogon, Scale-breasted and Golden-collared Woodpeckers, Pompadour and Spangled Cotingas, Guianan Puffbird, Guianan Gnatcatcher, Ash-winged Antwren, Painted Tody-Flycatcher, Olive-green Tyrannulet, Short-billed Honeycreeper and Dotted Tanager. Once we are finished here we will head to our base at Presidente Figueiredo where we will spend the next 3 nights.

Day 7 – 8   Presidente Figueredo
The city of Presidente Figueiredo, 100km north of Manaus, has unique characteristics due to its rugged terrain and is a real paradise with over 50 waterfalls and is home of the spectacular Guianan Cock-of-the-Rock. One of the highlights of our stay here will be a visit to a lek of these amazing birds just a 15 minute walk away from our pousada. There are also several species in this region that reach the southernmost part of their distribution limits such as Painted Parakeet, White-breasted Wood-wren and Dusky Purpletuft. We will also visit a white sand soil forest (locally known as campinarana) with its unique birds and is our best chance to see Black Manakin, Pale-bellied Mourner, Northern Slaty-Antshrike and the emblematic Pelzeln's Tody-Tyrant.

There are a number of important sites to visit in the surrounding area such as Cachoeira da Onça, where our main targets will be Azure Gallinule, Hoatzin, Rufous Potoo, Pompadour Cotinga, the strange Capuchinbird, Guianan Red Cotinga, Cinereous Antshrike, Rufous-throated and Black-headed Antbirds, Musician Wren and Yellow-crowned Manakin amongst others. Cachoeira das Lages is good for Green-tailed Goldenthroat, Bronzy Jacamar, Black Manakin, Pale-bellied Mourner and White-naped Seedeater. Ramal do Mari-Mari is a terra firme forest and has a lek of Guianan Cock-of-the-Rock and a good chance of Yellow-crested Manakin. And this is a great place to see psittacids with numerous species of parrot possible in this area with Festive Amazon, Red-and-green Macaw, Sapphire-rumped and Scarlet-shouldered Parrotlets, Vulturine, Caica, Red-fan, Black-headed, Dusky, Orange-cheeked and Short-tailed Parrots, Golden-winged, Tui, Crimson-bellied, Santarem and Golden Parakeets all present.

Day 9   Presidente Figuieredo - Manaus
We have one last morning to undoubtedly find more new species before driving back to Manaus. Our programme today is flexible depending on what species we need to target. Night in Manaus.

Day 10   Manaus - Ilha Marchantaria
We have a full days exploration of several different islands along the Solimões River by boat. We will focus our search on island specialists such as Olive-spotted Hummingbird, Antshrike, Black-and-white Antbird, Red-and-white and White-bellied Spinetails, Brownish Elaenia, River Tyrannulet, Riverside Tyrant and many others. It will be hard to leave here but we will head back towards Manaus, possibly visiting Ramal do Pau Rosa again for species that we have missed so far.   Night in Manaus.

Days 12 - 14   Rio Azul Lodge
This fabulous lodge in southern Para state is situated beside the Rio Azul River and is at the southern edge of the Amazonian rainforest. The habitat here is a little different to the other areas we visit on this tour as it supports a great stretch of transitional forest with white-sand forest and even more stunted vegetation. No doubt we will begin each morning scanning from the lodge clearing where we can se species such as Speckled Chachalaca, Red-throated Piping-Guan, Spix’s Guan, White-throated Toucan, Red-bellied and Blue-winged Macaws, Orange-winged Amazon, White-bellied Parrot, Channel-billed and White-throated Toucans, Gould’s Toucanet, Blue-necked Jacamar, Yellow-tufted Woodpecker, Eastern Striolated, Pied and Collared Puffbirds, Glossy Antshrike, White-browed and Southern Chestnut-tailed Antbirds, Pale-rumped Swift, Plush-crested Jay and Black-fronted Nunbird. Probably the most important species here is the odd-looking endemic Bald Parrot that can sometimes be seen flying over the clearing and we hope to get tickable views sometime during our stay.

Lunch will be taken back at the lodge each day and is an ideal time to rest or take photos of the ‘garden’ birds that can include Green-tailed Goldenthroat, White-chinned Sapphire, Black-throated Mango, Fork-tailed Woodnymph, Amethyst Woodstar, Bat Falcon, Red-necked Aracaris, Bronzy Jacamar, Yellow-tufted Woodpecker, Swallow-winged Puffbird, White-banded Swallow, Spotted Tody-Flycatcher, and even during the heat of the day flocks can pass by that often include species such as Blue-necked, Blue-grey, Masked, Turquoise, Yellow-backed and Opal-rumped Tanagers, Black-faced Dacnis, Short-billed, Green and Purple Honeycreepers.

We will also visit some of the more remote areas of the rainforest by boat in search of the much-wanted Zigzag Heron, as well as Sunbittern, Yellow-crowned and Kawall’s (White-cheeked) Amazons, Blue-and-yellow Macaw, Curl-crested Aracari, Blue-tailed Emerald, White-banded and White-winged Swallows, Glossy Antshrike, Silvered Antbird, Amazonian Streaked Antwren and Olive Oropendola.

Night-birding can be productive with Blackish Nightjar and Tawny-bellied Screech-Owl present. Nights at Rio Azul Lodge.

Day 15   Fly Alta Floresta – Cuiaba - Manaus
We should have a few hours to spend at this delightful lodge and surrounds before driving back to Alta Floresta for our flight to Cuiaba and onward connection to Manaus. Night in Manaus.

Day 16    Fly Manaus – Itaituba – Amazonia National Park
Our adventure continues with a short flight to Itaituba where upon arrival we will transfer to our pousada and base for the next 4 nights for our exploration of Amazonia National Park. It is conveniently located on the left bank of the Tapajos River and just a short ten-minute drive to the entrance of the National Park. There’s a network of trails inside the tall Amazonian forest and depending on flight timings we may have a little time to go birding in the late afternoon. Night in Amazonia.

Days 17 - 19    Amazonia National Park
Our first day here on the trails of Amazon National Park will be one of the most exciting of the tour as we target some really localised species. Some target species for today include White-crested Guan, Golden Parakeet, Razor-billed Curassow, Cryptic Forest-Falcon, Crimson-bellied Parakeet, Brown-chested Barbet, Gould’s Toucanet, Blue-cheeked Jacamar, Guianan Red-Cotinga, Variegated and Alta Floresta Antpitta, Hoffmann’s Woodcreeper and Musician Wren.

The Tapajos River forms several islands and some of them are near where we will stay. These islands contain several species, one of them in particular Blackish-grey Antshrike that will soon be split. Along the river we can see Capped Heron, Pied Lapwing, Large-billed and Yellow-billed Terns, Band-tailed Nighthawk, Pale-rumped Swift, Amazonian Inezia, Glossy Antshrike, White-browed Antbird, Amazonian Streaked Antwren, Curve-billed Scythebill and Swallow-wing.

Day 20   Amazonia National Park – Manaus – End of tour  - 24th July 2020
After some final birding we will transfer to Manaus airport for our international flights home and end of the tour. 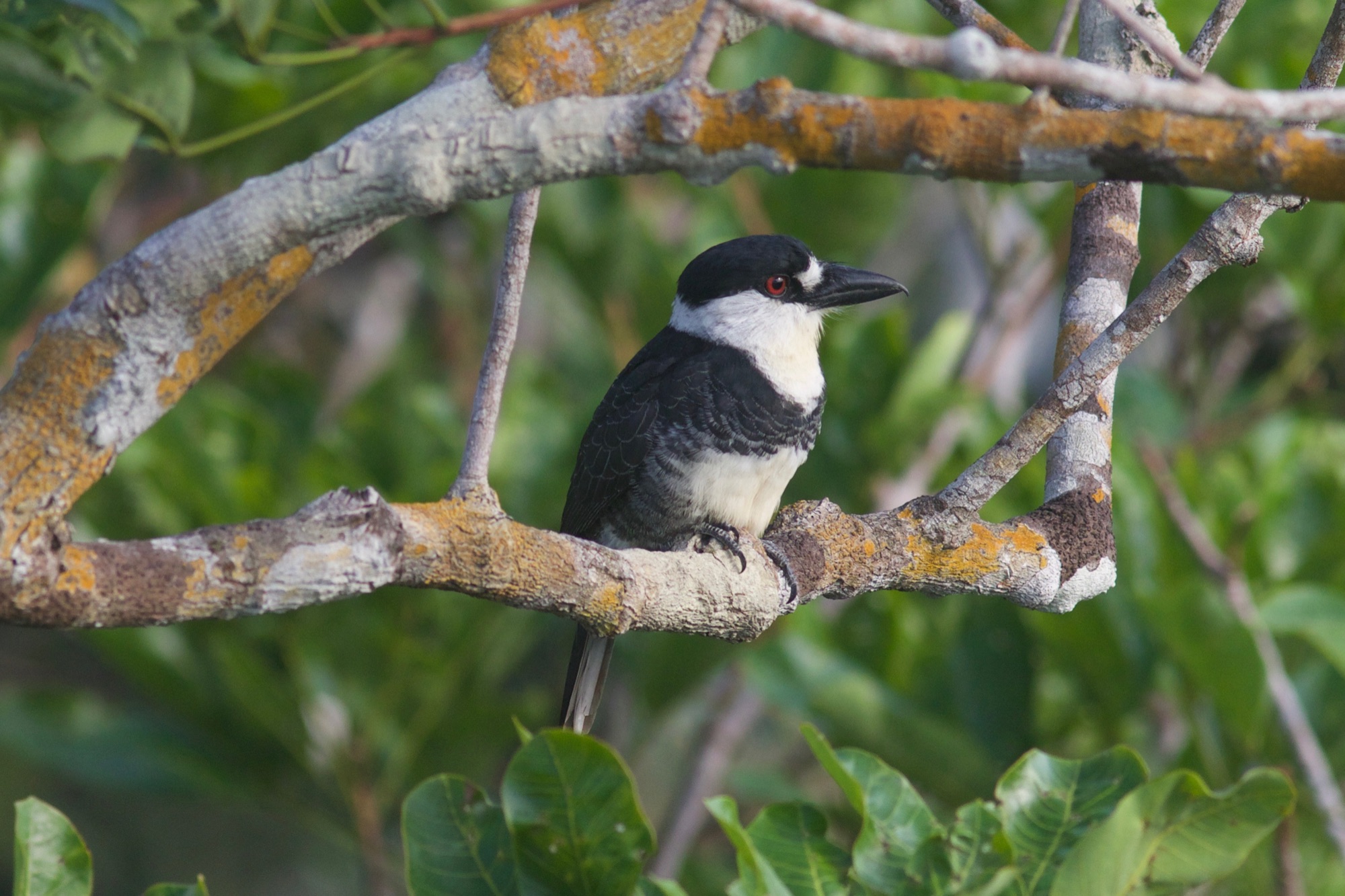 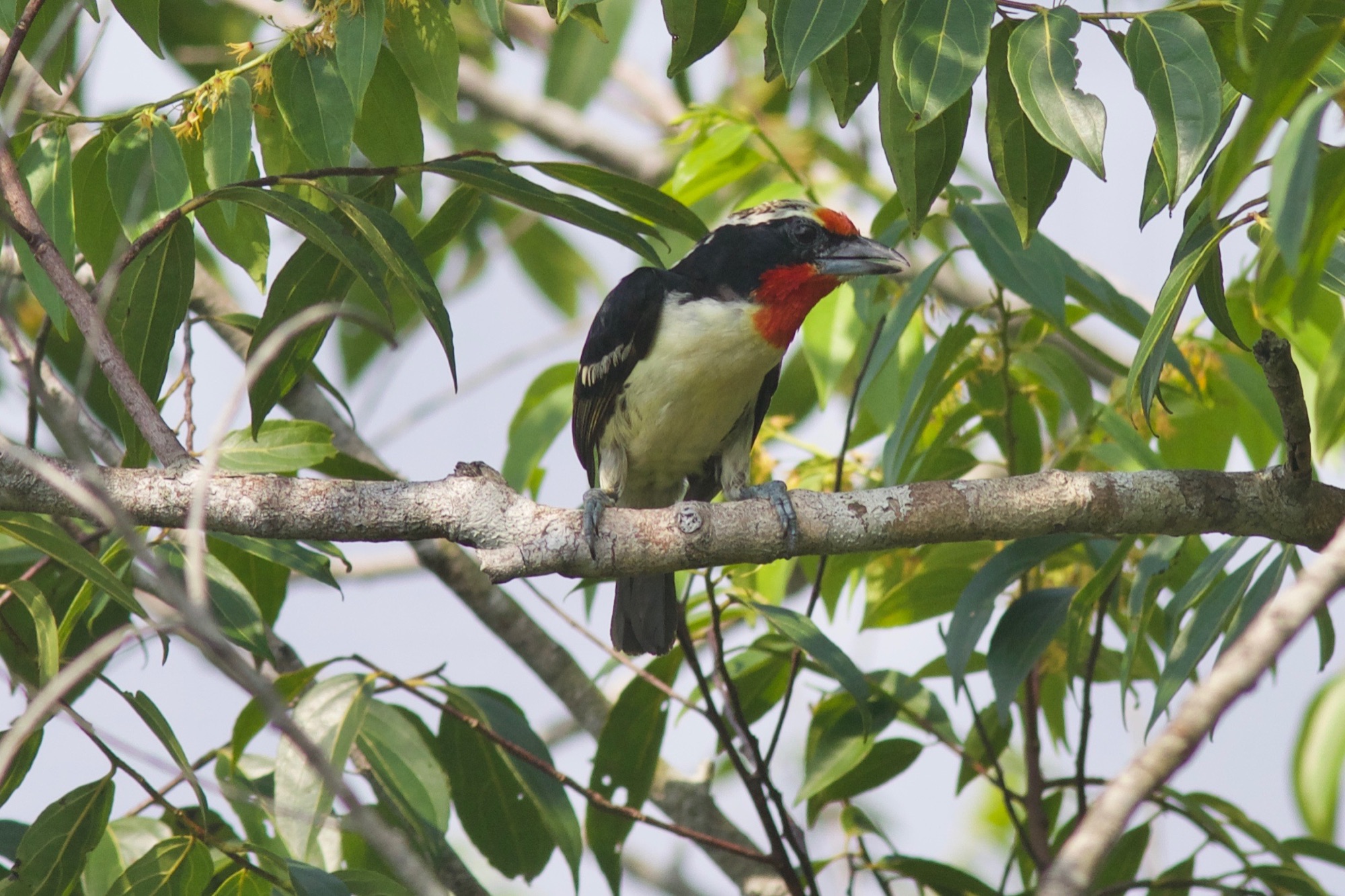 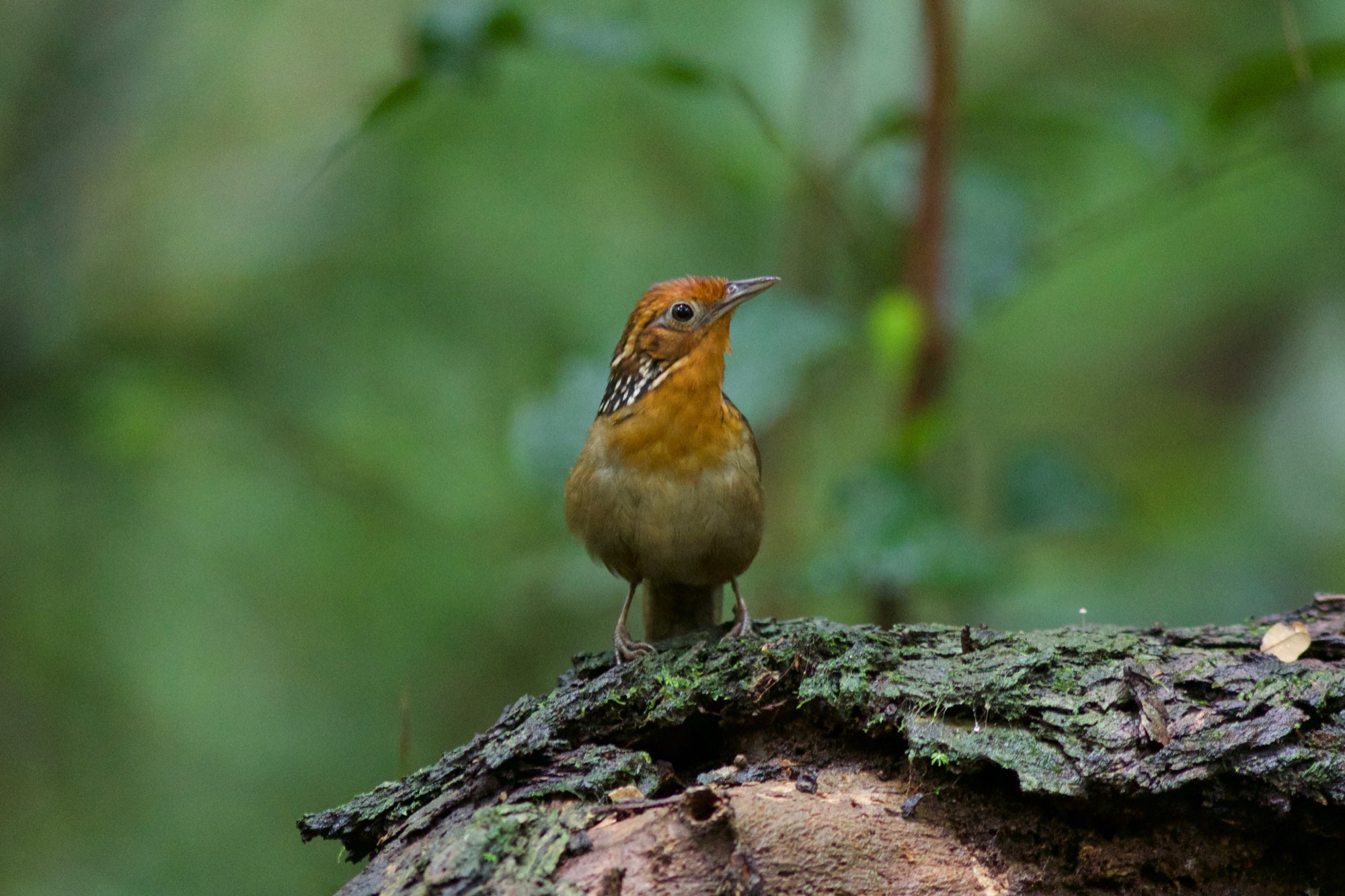